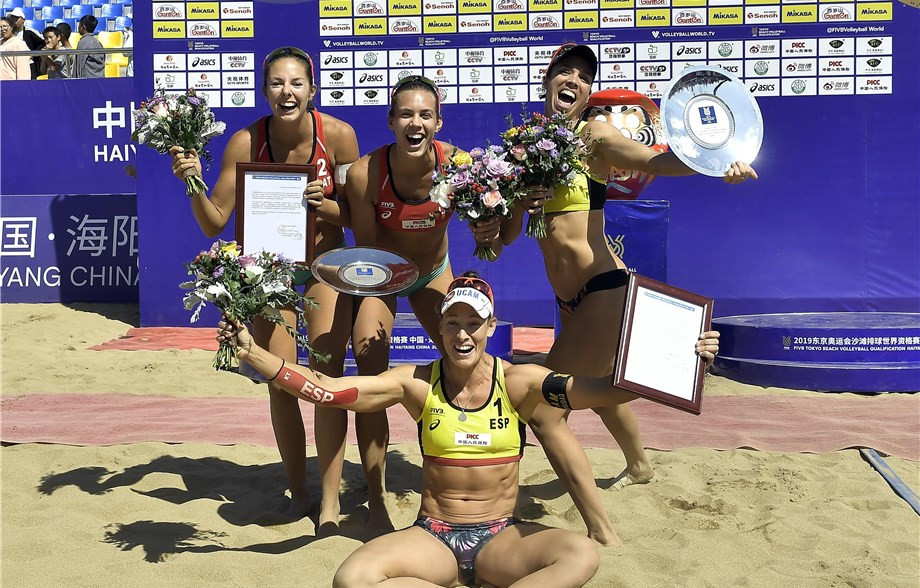 Latvia’s European champions Tina Graudina and Anastasija Kravcenoka, and the Spanish pair of Elsa Baquerizo and Liliana Fernandez, earned their countries a place at Tokyo 2020 at the beach volleyball Olympic qualifier in China.

Graudina and Kravcenoka, who won their continental title in Moscow last month, rallied from a 12-8 deficit in the third set to beat Barbora Hermannova and Marketa Slukova of the Czech Republic 21-17, 15-21, 17-15.

The win saw the duo become the first women’s team to qualify Latvia for next year's Olympic Games.

It also completed a Latvian double at this at this International Volleyball Federation event in Haiyang, as Martin Plavins and Edgars Tocs qualified yesterday.

The other men’s qualifiers on the day were Rio 2016 Olympic Games silver medallists Daniele Lupo and Paolo Nicolai of Italy.

In today's first women's final, Baquerizo and Fernandez gained an Olympic berth for Spain's women with an 18-21, 21-17, 15-10 win over Sandra Ittlinger and Chantel Laboureur of Germany.

Check out these #Highlights from the astounding win by Graudina/Kravcenoka 🇱🇻 over Hermannová/Slukova 🇨🇿, including their key aces in the end!

"This is such an emotional moment for us," Kravcenoka said.

"We hung together despite being down 12-8 in the deciding set.

"Obviously, this ranks as our greatest moment as beach volleyball players.

"Winning the European Championships was special and unexpected, but this win today ranks as a great achievement as we become the first women's team from our country to qualify for the beach volleyball competition at the Olympics.