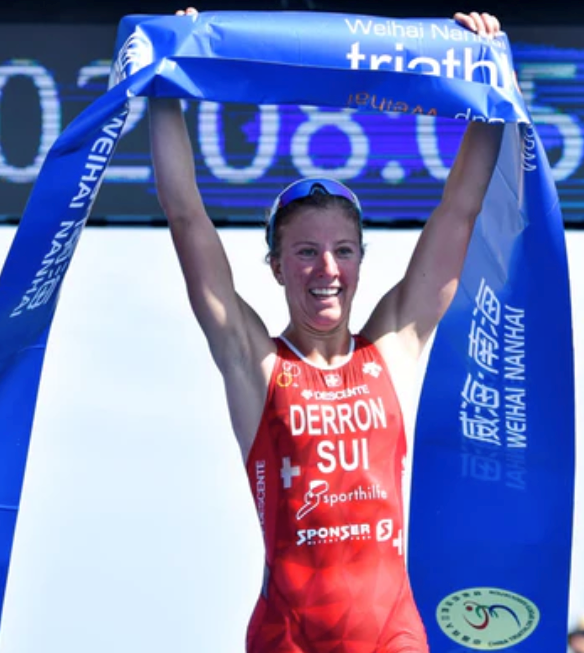 She emerged as the winner after a standard-distance race in the eastern-Chinese city, which began with a two-lap swim in Halfmoon Bay.

Lotte Wilms of The Netherlands emerged from the water first but Derron was part of a three-strong breakaway which took charge of the race on the bike.

The group, also including Italy's Verena Steinhauser and Spain's Miriam Casillas Garcia, created such a large gap that everyone else was out of contention by the time of the run.

On the second lap, Derron was able to pull away from her rivals to capture her first title on the circuit.

"I am really really happy, I can't believe it just yet," she said.

"It's great those days when it works out like it should and today was a day like that and I am overly happy.

"It came together pretty much after the swim so I knew I had to really nail that transition and the first hill.

"Verena pushed that first hill really hard and I know how strong she bikes so I had to keep going with her.

"After that first hill, we had a little gap and rode well together.

"I knew there were strong runners behind us so we needed a big gap onto the run.

"To come away with my first World Cup win is just really good."

The men's race was won by Portugal's Joao Silva in a race which was wide open going into the run.

Israel's Shachar Sagiv was first out after the swim but a huge leading group then formed on the bike and stayed in place at the final transition.

Silva managed to surge to the front in the final stages of the run and he held on for the line.

"I am pretty tired now actually but it's a nice course, a really tough bike and even the run is hard," he said.

"I am really pleased with my performance today.

"The support from all the people here was unbelievable.

"The first laps were a little bit scary for me especially the downhill.

"I really didn't know what to expect because my preparation for the race was not ideal and I played it safe so I could arrive to the finish and then I went for it and I tried my best and luckily it was enough to secure first place."