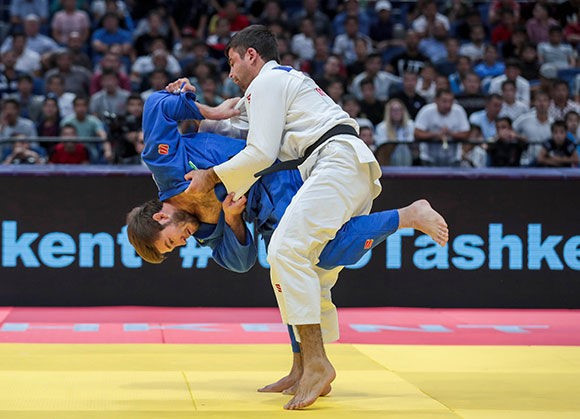 Sharofiddin Boltaboev of Uzbekistan clinched the men's under-81 kilograms title on a day when he broke the record for the fastest ippon on the International Judo Federation World Tour, at the Grand Prix in Tashkent.

Boltaboev topped the podium after defeating compatriot Kamoliddin Rasulov in an all-Uzbek final at the Humo Arena.

But it was in the second round where he made headlines, as Boltaboev beat Nai Rigaqi of China with an ippon in just 2.88 seconds.

The result saw the Uzbek break a record which had stood for nine years.

It was previously held by Japan's Takamasa Anai in his contest with Ariel Zeevi of Israel.

The bronze medals in the under-81kg division went to Shamil Borchashvili of Austria and Belgium's Sami Chouchi.

Boltaboev was one of two Uzbek judoka who claimed gold on the second day of the event, as Khikmatillokh Turaev triumphed in the under-73kg division.

Turaev was behind for the majority of his clash with Tajikistan's Behruzi Khojazoda, but forced golden score and then got the better of his opponent in the additional period.

Magdiel Estrada of Cuba and Turkey's Bilal Ciloglu were the recipients of the bronze medals.

Elvismar Rodriguez of Venezuela and Hilde Jager of the Netherlands won their respective bouts to earn bronze.