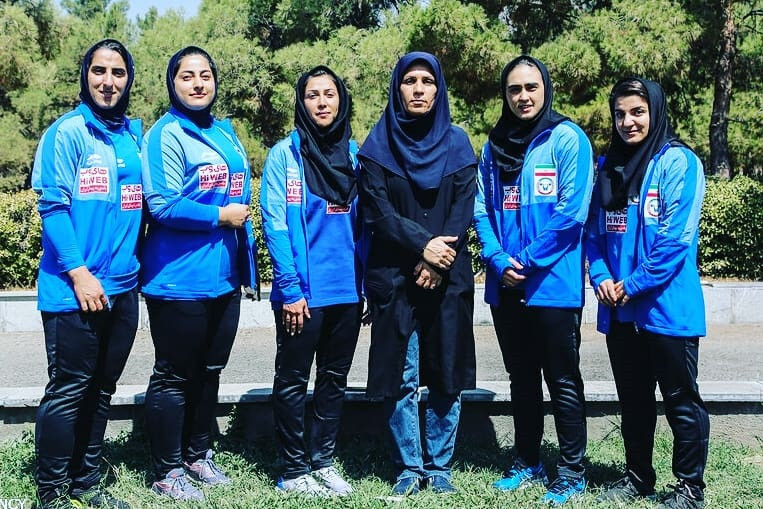 Poupak Basami made history on Thursday (September 19) by becoming the first Iranian woman to compete at an IWF World Championships.

The 27-year-old, part of a four-strong Iranian women's team, finished sixth in the women's 55 kilograms D session after managing a total of 158kg.

While Iran has been a powerhouse in men's competition for several years, it was not until 2017 that the Iran Weightlifting Federation (IRIWF) allowed women to compete officially.

The National Olympic Committee of the Islamic Republic of Iran supported the IRIWF and, after decades of state opposition to women competing, there was a breakthrough at the Fajr Cup in Ahvaz in March last year.

That competition was for men only, but a female weightlifting development programme was launched at the same time and an eight-year-old girl, Aysan Adib, gave an exhibition on the competition stage that made headlines across the nation.

A month later, Iran sent a team of four to the Asian Youth Championships in Urgench, Uzbekistan.

Three of them finished last in their weight category, more than 100kg behind the winner, while the best performance was by Elnaz Bajalani, fifth in the 63kg class, 73kg behind the Uzbek champion.

Papandrea, the President of USA Weightlifting and an IWF vice-president, was in Ahvaz to help with the launch of the development programme.

She told insidethegames she is impressed by how quickly the Iranian female lifters have progressed.

"When you look at the Iranian team, the backing of the President – and even their Olympic Committee has been in support – that’s helped," Papandrea said.

"I’m just really excited and happy to see them here."

"But you must be strong when working on this," he told insidethegames.

"If you're waiting and waiting, this is not good for the future.

Basami, who became the first Iranian woman to participate at the Asian Weightlifting Championships in April, is joined on the Iranian women's team by Seyedehelham Hosseini, Abrisham Arjomandkhah and Parisa Jahanfekrian.

The lifters are trying hard to qualify for the Tokyo 2020 Olympic Games, for which Iran can enter a maximum of two men and two women, while Paris 2024 is the big target.

"We are here to get points for the Olympics," Basami told insidethegames.

"And I know that the Olympics is a very high-level competition and we have to train very hard to get there.

"After we get back to our country from any competition, it's a new start for us and we just double our training and everything so we can go very fast and we can achieve what we want."

Hosseini and Arjomandkhah will contest the 71kg A and B sessions, respectively, while Jahanfekrian will compete in the 87kg C session.

"It's interesting because we say they're still in a place where the women have to coach the women, but that’s actually a great thing.

"Even when you look at how that's come about – in so many countries because the men coach the women, you see very few women coaches.

"It's not something we've ever seen in the United States or most of the western countries.

"I mean if you look around, there's very few female coaches with their teams here.

"But the Iranian team actually has a woman coach with them, so it's an interesting little irony in the whole story that they will actually probably end up with more female coaches per athlete than anyone else because of the way that it's been done."

Arjomandkhah was formerly a high-level kickboxing athlete and says that experience has helped her in weightlifting.

"Mentally and spiritually I get better because I've competed before and I know what to do when I get to competition," she told insidethegames.

"At least I don’t get stressed or something like that, but weightlifting is a little bit different because it's very focused.

"But my sporting life has helped me very much.

Papandrea believes the rate of development will increase if the IRIWF can attract women who have a sporting background to weightlifting.

"We've seen lots and lots of women who transfer into our sport from other sports that have been very successful," she said.

Referring to the Iranian team, she added: "I was watching some of the videos of them training and when you're looking at the fact that some of them have been training for less than a year, the numbers that they're doing are actually quite impressive.

"Many athletes that eventually make it to the elite ranks, that's not when they're doing those numbers.

"Within the United States, we see a lot of lifters that start as adults and when you look at the progress from that perspective, I mean some of them are already lifting quite a bit for the amount of time they've put in.

"There is a disproportionate gain there.

"We'll just have to see where it goes because they're in such early stages."

Moradi is already looking ahead to the future.

"The next step must be to find talented lifters, and also, according to this talent, we must be focused for good lifters and for the potential of female lifters," he said.