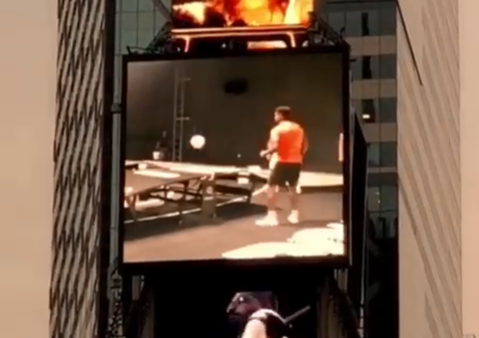 Teqball has made its mark on one of the world's biggest cities with an advertising space in Times Square.

A video advertisement for the sport has been displayed on one of the giant electronic billboards surrounding the Square in the middle of New York City.

It appears alongside adverts for DogPound, the New York and Los Angeles gym co-owned by International Federation of Teqball (FITEQ) vice-president György Gattyán which is popular with Hollywood stars.

"Times Square is one of the world's most visited tourist attractions and somewhere we've always aspired to be featured when it comes to increasing our brand awareness," said Gattyán.

"It’s a fantastic feeling to see Teqball and DogPound side by side with iconic brands.

"In just a short space of time we've reached a point where we're able to invest in advertising opportunities like these as we look to continue growing our brand awareness in the United States and beyond."

Times Square is estimated to draw roughly 50 million visitors per year, with around 330,000 people passing through on a daily basis.