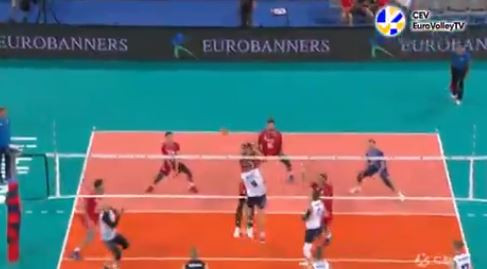 With only one of their pool C matches at the Stožice Arena in Ljubljana, Slovenia their place in the round-of-16 due to start on September 21 is assured.

The Championships are being staged for the first time across four countries - France, Belgium, The Netherlands and Slovenia, with Paris due to host the bronze- and gold-medal matches on September 28 and 29,

In other preliminary round action today, the pool C hosts strengthened their chances of accompanying Russia to the knockout stages as they beat Turkey 3-0.

Germany, beaten by Russia in the 2017 final in Poland, earned their first win of this year's Championships after successive defeats, earning a 3-0 victory over Austria,

But their chances of progressing from pool B - which is being played at Palais 12 in Brussels - are still not great, with the hosts, who finished fourth in 2017,  in the lead on three wins.

A 3-0 win over Bulgaria tonight has established France top of pool A - being played at Sud de France Arena in Montpellier – with four victories.

Poland remain in charge in pool D - being played jointly in Rotterdam and Amsterdam – as they earned their third win tonight, 3-0 over the Czech Republic.

Ukraine kept in the hunt to progress with a 3-1 win over Montenegro.

Pool matches are due to continue tomorrow.