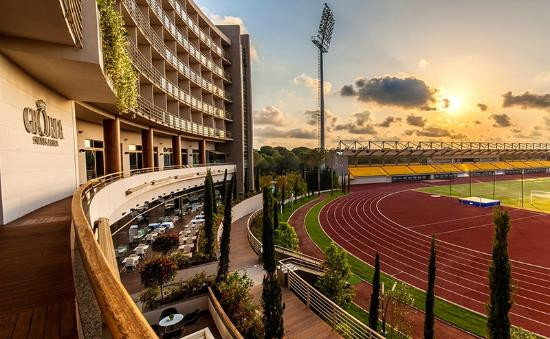 Gloria Sports Arena (GSA) chief executive Elif Özdemir is aiming to create an academy here as the organisation goes from strength to strength on the international sports map.

Talking exclusively to insidethegames, Özdemir revealed that creating an arena to develop the next generation of stars is in the long-term plans for the facility, based in the southern Turkish town.

"In the lead-up to Paris 2024 we will set up some milestones to become an academy," she said.

"We already have some kids coming in and want to take a more systematic approach where we can educate these young people.

"We aim to bring up our own athletes with our own mechanisms and training programmes."

Özdemir claimed GSA wants to invest in the youth and help them get better.

"GSA wants to see what we can give to these young people," she said.

"We want to become a hub and it is happening very fast."

Mid-term ambitions are plans to expand the brand on a global scale.

"That is one of our goals but we are thinking of offering consultancy after contact from Australia, Hungary and Switzerland.

"Our company has to prioritise and focus on us for now but they are certainly in our mid-term goals."

The first Gloria Cup basketball meet was held in Istanbul in 2014 but has since developed to cater for volleyball and athletics meets.

Such has become the popularity of the venue and its competitions, GSA has had to set new targets and ambitions.

In just the second year of running as a sports training centre, 27 Olympic medals were won by athletes who had trained in Antalya, with 10 gold, five silver and 12 bronze medals won by 22 athletes and three teams at Rio 2016.

"With all the information we had taken in after Rio, we said that by 2020 we want to get 200 medals overall at the end of Tokyo, taking into account European and World Championships too," Dönmez added.

GSA hosted the Welsh national rugby team as it prepares for the Rugby World Cup, starting in Japan on Friday (September 20), and teams are already signing up to use the base as they prepare for next year's Olympic Games in Tokyo.

A team of 200 Belgian athletes from 12 sports are scheduled to arrive in Antalya in December, and Özdemir believes GSA can bring out the best of the Tokyo 2020 Olympians, while the German hockey team are also set to visit the venue before heading to Japan.

"We are trying to put athletes with the high performance and push their limits.

"We did our research very well so that before championships they [athletes] are in an environment where they can experience live broadcasting, the same referees and the same teams.

"It is a great experience for them and mimics what is ahead."

Looking beyond 2020, when GSA will host diving teams from Britain and Russia, Özdemir believes aquatics and dancing could be the next sports added to the Gloria Cup.

With three pools at the venue, one Olympic-sized outdoor pool, a 25 metre pool and an indoor six-lane 50m pool, there is no reason to think that it will not happen.

"Over the last five years, swimming is our number one sport," Özdemir said.

"We want to develop the diving dry land area.

"We have a lot of interest from diving teams so it is among our plans to improve the area.

"Sport is changing globally and we are trying to give a fast reaction to this change."

Donmez summed up what GSA is about.

"If its 'win-win' for everyone then we will pursue that project."