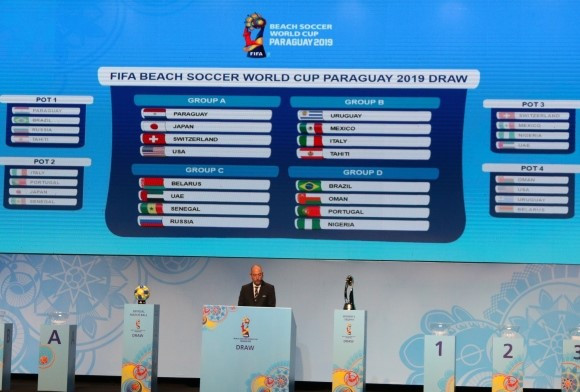 Hosts Paraguay will play Japan in the opening match of the 2019 FIFA Beach Soccer World Cup following the draw for the tournament.

The draw involving the 16 participating nations took place at the South American Football Confederation Convention Centre in the Paraguayan capital city of Asuncion.

Paraguay are in Group A alongside Japan, Switzerland and the United States.

They will play the Japanese in the tournament opener at 9pm local time on November 21.

Five-time winners and reigning champions Brazil are in Group D, and kick-off their campaign on November 22 against Oman.

Portugal and Nigeria are the other two sides in that pool.

Tahiti, who were runners-up to Brazil at the last tournament in 2017 in The Bahamas, are in Group B.

They face Uruguay, Mexico and Italy.

The 10th edition of the Beach Soccer World Cup, which first took place in 2005, will run until December 1.