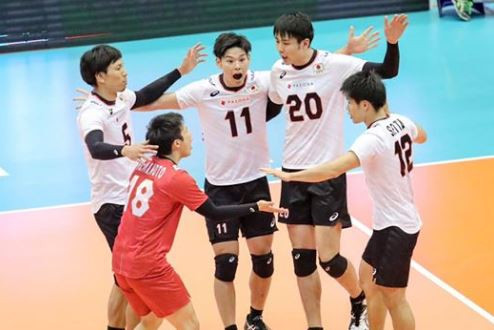 Reigning champions Japan earned a second victory at the 20th Asian Men's Volleyball Championships in Iran, and now face Chinese Taipei to determine the winners of Pool B.

Second seeds Kazakhstan, who lost their opening match in Pool C to an unseeded India team, recovered their equilibrium with a straight-sets win over Oman – 25-21, 28-26, 25-16.

The European Men's Championship is being played for the first time across four hosting countries – France, Belgium, The Netherlands and Slovenia, with Paris hosting the bronze- and gold-medal matches on September 28 and 29.

Russia, who beat Germany in the 2017 final, have made a solid start to their defence, having beaten Turkey and Belarus by the same score of 3-1 to take charge of Pool C, which is being played at the Stožice Arena in Ljubljana, Slovenia.

They followed this up today by beating North Macedonia 3-0.

Slovenia earned their second win of the Championships with a 3-1 result against Finland.

Serbia, the 2017 bronze medallists and one of the four top seeds, have also made a strong start, leading Pool B – being played at Palais 12 in Brussels – after a 3-0 win over the 2017 silver medallists, Germany.

Belgium, the team Serbia beat to bronze last time round, are also off to a winning start in Pool B having defeated Austria 3-0.

Slovakia beat Austria 3-1 in the final Pool B match of the day.

Of the other two top seeds, Italy have won both their opening Pool A matches – being played at Sud de France Arena in Montpellier – beating Portugal 3-0 and Greece 3-1.

The hosts, France, matched them today as they beat Greece 3-0.

While in the other pool A game Bulgaria beat Portugal 3-1.

The fourth side from the top pot, Poland, earned a 3-1 win over Estonia in Pool D, being played jointly in Rotterdam and Amsterdam.