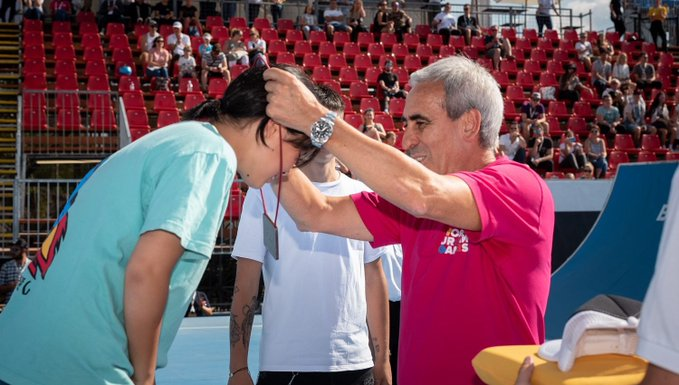 Global Association of International Sports Federations (GAISF) President Raffaele Chiulli has welcomed the opportunity to collaborate with the International Olympic Committee (IOC), who are preparing to launch an Olympic urban park for the first time, at Tokyo 2020.

The three-day event is expected to prove valuable for the IOC as the Olympic Games draw closer, with Tokyo 2020 set to hold several events at the Ariake Urban Sports Park.

This will include BMX racing and freestyle events, skateboarding, sport climbing and 3x3 basketball.

Organisers say visitors will feel and enjoy urban sports, with exhibition performances by athletes and a sport experience area.

Chiulli believes the first World Urban Games can provide further help to the IOC, while he suggested the event gives an ideal platform for federations to showcase their disciplines.

"We are working very closely with the IOC," he told insidethegames.

"We are very keen to share with them the experience, but we do not want to duplicate and overlap anything.

"We are complementing what they do and discussing in advance how to optimise the things they do to create something relevant to each of our stakeholders.

"This is a platform which allows large or small federations, Olympic and non-Olympic, to showcase their best athletes and their disciplines.

"For the new generation it helps them get closer to the sport.

"We have important sponsors, such as Red Bull, who are after something engaging to younger people, both athletes and fans.

"This was another clear sign the concept is relevant to partners, sponsors and the IOC."

Around 300 athletes from five continents are competing in Budapest.

The Hungarian capital can exercise an option to also host the second edition of the Games, which is due to be held in 2021.

Chiulli explained GAISF is open to the possibility of expanding the number of sports on the programme, with nine events initially expected when the Games was first launched last year.

Sports climbing bouldering and the street and park skateboarding events had been included when Los Angeles was named host city in November, before being replaced by Budapest.

Chiulli said a thorough process will continue to ensure the sport programme fits the host city.

The @WorldUrbanGames is about creating an opportunity for young people to try new sports and inspiring the next generation of urban athletes #WUGBudapest pic.twitter.com/Q8KlBCriuC

"The idea is to evaluate as much as possible about what is really urban," he said.

"Here we have seen good examples.

"While we were thinking about skateboarding, we realised roller freestyle is equally interesting and appealing.

"Our aim is to establish an open dialogue with the host city and see how the sports fit the city and the type of culture in their type of urban setting.

"The disciplines have to go along with the requests of the host and what kind of infrastructure they have available.

"As well as the cost optimisation.

"The Games have to be affordable, with free tickets, be accessible and sustainable."

The second edition of the World Urban Games will be one of two events GAISF is set to hold in 2021, with the World Combat Games due to relaunch.

Nur-Sultan, Kazakhstan's capital city, was awarded the event in May.

Chiulli confirmed discussions will take place with the host nation in the coming weeks to decide the sport programme.