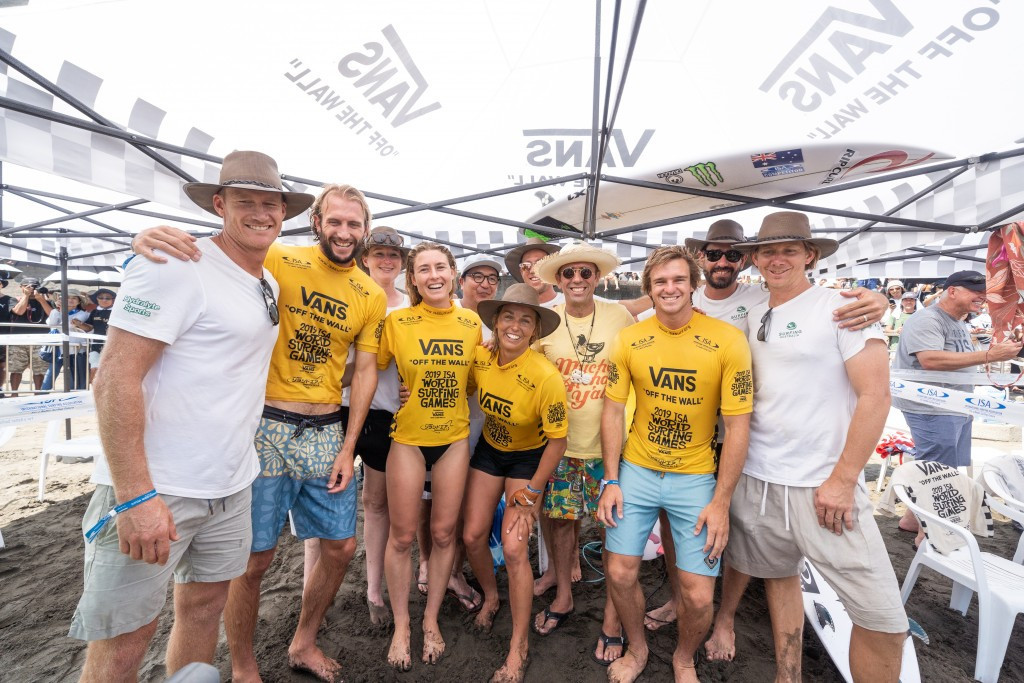 Australia won the Aloha Cup title as action continued at the World Surfing Games in Japan.

The event sees men and women join forces for a team relay and it was the Australians who impressed most in Miyazaki.

They ended on a total of 38.19 points as Ryan Callinan, Owen Wright, Sally Fitzgibbons and Nikki Van Dijk came together.

South Africa collected silver on 38.11 as the United States ended on 35.38 for bronze at the International Surfing Association (ISA) event.

Hosts Japan, who are preparing to stage surfing's Olympic debut at Tokyo 2020, tallied 28.10 for the copper medal, awarded in surfing to fourth place.

"It's a great feeling to be a part of a team," said Callinan.

"It's so different for our sport to be here representing Team Australia and to get a win is amazing.

"It had a relaxed vibe and all of the other countries involved looked like they were having a lot of fun.

"We really embraced the opportunity."

The format sees each surfer catch two waves during their leg of the relay before tagging in a team mate.

It looked as if the US would win, but Kelly Slater fell during his final attempt and was forced to sprint to the beach to reach the team box in the allotted time.

He failed to do so and the Americans were handed a five-point penalty, tumbling them down into bronze.

"It's full of unity, camaraderie and joy that epitomise the ISA spirit.

"Drama was not lacking in today's final as we were on the edge of our seats until the final seconds.

"Congrats to Team Australia for putting together an all-around team performance to earn the first team-oriented gold medals of the event."

Murakami, a member of Japan's gold medal winning team at the 2018 World Surfing Games who also scooped the individual copper medal, earned the two highest wave scores of 8.83 and 7.67 as qualification rounds resumed.

Gabriel Medina of Brazil also impressed with huge manoeuvres, earning a heat total of 13.50 to advance into round two.

Three more days of men's action are ahead, leading to their final on Sunday (September 15).