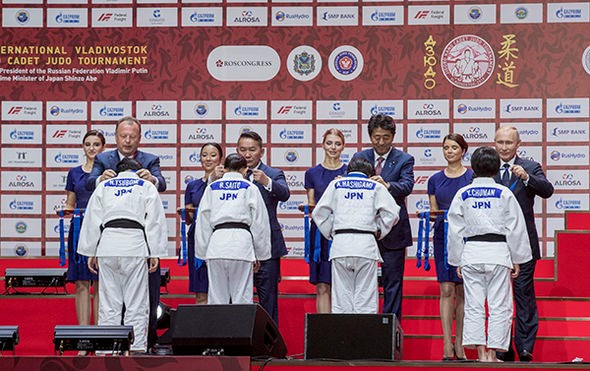 The officials were greeted by IJF President Marius Vizer.

Competition took place over four days, with the event forming part of the Eastern Economic Forum.

The Forum has been billed as an attempt to develop business ties between countries across Asia.

With India participating for the first time, Modi was named as an honoured guest of the competition.

Medals were won in three different categories, with the overall winners determined by the total points earned.

Mongolia emerged as the winners of the women's under-18 team event, while Japan secured victory in the mixed team competition by beating Russia in the final.

Russia claimed victory in the crucial "gold" competition, which had the highest weighting of the three events held.

It ultimately saw Russia share the overall title with Mongolia, with Japan finishing in third place.

Vizer was joined by Putin, Battulga and Abe in presenting medals to the podium finishers.

"I want to appeal first of all to our guests, to thank them for coming to Russia to participate in these competitions," Putin said.

"Thanks to the IJF and, of course, to my colleagues, heads of state and Government, who take the time to come here and enjoy this wonderful sport.

"Best wishes to the winning athletes.

"This is a youth tournament, and the fact that at this age boys and girls achieve results is very good.

"But sports in general and judo in particular have been proven many times – you can't stand still if you want to achieve real, big victories.

"Therefore, dear children, dear girls, I want to wish you success in sports and on your life path.

"Diligence and talent will open you a wonderful road to the future, and sports will always accompany you and help you in any of your endeavours."

IJF vice-president and European Judo Union President Sergey Soloveychik was also among the attendees at the event.