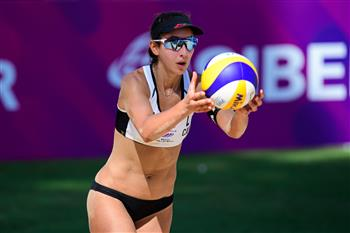 Canada’s Melissa Humana-Paredes and Sarah Pavan battled into the quarter-finals of the women’s event at the International Volleyball Federation Beach World Tour Finals in Rome.

The reigning world champions faced Switzerland’s Nina Betschart and Tanja Huberli as they looked to reach the last eight.

Humana-Paredes and Pavan won the opening set 21-12, but their rivals hit back by taking the second 21-15.

"It has been an up-and-down couple of days, that’s for sure, and that’s to be expected at the end of the season," Humana-Paredes said.

"At this point it’s just about surviving and giving everything, you’ve got.

“It’s been a long season, you can see it’s wearing us down but at this point it’s survival of the fittest and it’s whoever wants it more, who has the heart."

The Brazilians were comfortable 21-16, 21-13 winners over Marta Menegatti and Viktoria Orsi Toth of Italy to progress to the quarter-finals.

Germany’s Margareta Kozuch and Laura Ludwig were also among the winners today, overcoming the Kelly Larsen and Emily Stockman of the United States 16-21, 21-16, 15-12.

The duo fell a set behind to Germany's Nils Ehlers and Lars Flüggen but responded impressively to claim a 15-21, 21-15, 15-11 win to reach the last eight.