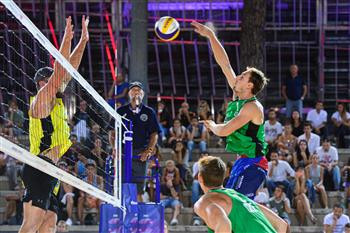 Ondrej Perusic and David Schweiner of the Czech Republic qualified directly for the last 16 by topping Pool D at the International Volleyball Federation Beach World Tour Finals in Rome.

Perusic and Schweiner, whose best result on this season's tour came when they earned silver in Ostrava, began their pursuit of a place in the knockout round with a 21-19, 21-13 victory over Russia’s Nikita Liamin and Taras Myskiv.

The Czech duo then upset Brazilians Alison Cerutti and Alvaro Filho 21-11, 21-14 to clinch top spot in their group at the Italian capital's Foro Italico.

"In one tournament anything can happen and that’s good for the underdogs like us,” Perusic said.

"We knew September would be important with the World Tour Finals and the Olympic qualifier and we took some time off after Moscow to make sure we’d prepare well."

Norwegian pair Anders Mol and Christian Sørum are also through to the last 16 after maintaining their impressive form this season.

Mol and Sørum, who clinched their seventh title of the year in Vienna last month, finished first in Pool B.

They defeated Quincy Aye and Arnaud Gauthier-Rat of France 21-12, 21-17 before overcoming Enrico Rossi and Adrian Carambula of Italy.