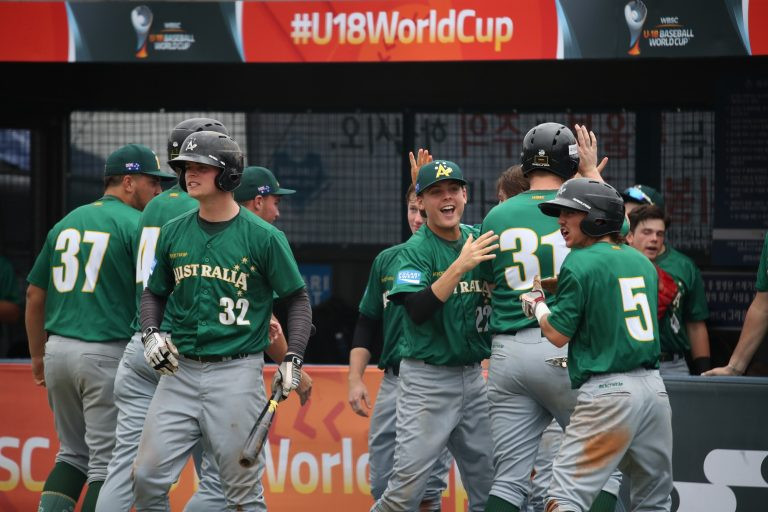 Australia claimed a huge 7-6 victory over Canada to book their super round spot at the World Baseball Softball Confederation Under-18 Baseball World Cup in South Korea.

The Oceania side faced elimination on the final day of opening group fixtures but did what they needed to do at Gijang-Hyundai Dream Ballpark.

They have ended Group A on a record of three victories and two defeats to join hosts South Korea and Canada in the super round.

Crucially, they will begin the next phase with two victories already to their name as opening round group results carry over.

The Australians had already beaten the Koreans and will be the only super round side to start with a 100 per cent record.

Netherlands, who beat Australia earlier in the tournament, could have gone through in the event of a Canadian victory but their 10-6 win over China today became immaterial.

Australia's other defeat in Gijang was against Nicaragua, who had already been knocked out.

Both Canada and Netherlands have ended on the same three wins and two losses record as Australia, but the Dutch were eliminated on the team quality balance ruling.

Canada will start the super round on zero points after losing to both Australia and South Korea in the first phase, with the hosts beginning on one victory.

All of today's matches were rearranged clashes due to rain earlier in the tournament.

In Group B, the three super round qualifiers had already been confirmed as Japan, Chinese Taipei and defending champions United States.

All three teams are going through with one victory on the board.

Japan beat the US, the Americans saw off Chinese Taipei and the Taiwanese defeated Japan.

Today's games saw the US beat Panama 5-3, while Spain saw off South Africa 16-8 in a battle between two eliminated sides.

The super round games begin tomorrow.

Australia take on the US with South Korea meeting Chinese Taipei and Canada playing Japan.

The top two at the end of the super round will contest the final.