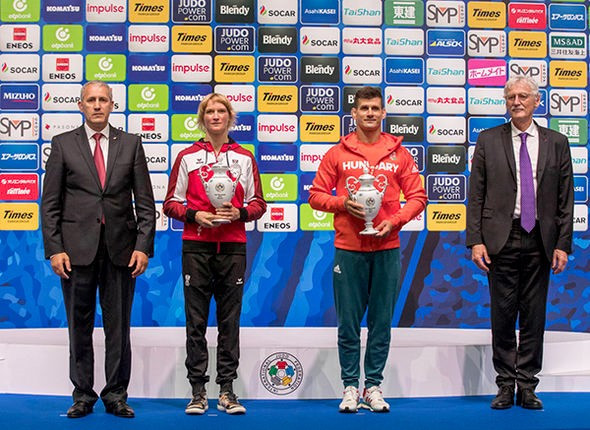 Sabrina Filzmoser and Ungvári Miklós have become the first ever recipients of the International Judo Federation (IJF) Fair Play trophy for their respect to the values of the sport.

The award was an idea of IJF President Marius Vizer and will now be awarded every year to athletes, coaches, personalities, clubs or countries who have given excellent service to judo.

The trophies were handed to Austrian judoka Filzmoser and Hungarian athlete Miklos during World Judo Championships.

Miklos was honoured for having participated in several IJF development activities in India, Nepal and Iran to promote the educational values of judo.

Filzmoser, 39, is involved in helping young judoka in Nepal and Bhutan.

“It's something really special for me, I didn't expect this award, Filzmoser, eaten in the first round of the under-57 kilogram competition at the World Championships, said.

"I have the feeling as I approach the end of my judo career that everything comes to its place - I do respect everyone, this is something crucial.

"Of course, my competition here at the Budokan didn't go exactly as planned and expected, but that is sport. I am still very happy today with this award.

"I think that we live in a very developed world, very social, where unfortunately all of us don't have the same chances.

"In Austria, I can get all I want, but in other countries, it's not always the case.

"I want everyone to have the same chances in life.

"Of course I love Nepal and Bhutan, because it's in the heart of the Himalayas, but I am engaged in development programmes there, because they need it."

The 38-year-old Miklós is a three-time European Championships gold medallist in the under-66kg category and winner of an Olympic silver medal at London 2012.

"I am very proud to be the first man and the first Hungarian to be awarded with this trophy," he said.

"I am thankful to everyone who thought that I could represent fair play in sport, among all the judoka in the world.

"I will always stay in judo, I want to transmit what judo taught me and I want to teach our values to all children.

"In judo our goal is to throw the opponent, but judo goes far beyond that simple observation.

"There is a reason why we bow, it is to show our appreciation to others.

"I like it very much, when before a match, both coaches are bowing to each other.

"It is simple but it shows that we are not simply fighters - we should show respect all the time."

An IJF spokesman said: "These two athletes have been on the circuit for many years and have proved on many occasions that they were playing fair and were always respectful of their opponent.

"Their exemplary behaviour is an example for other athletes and for the young generations of judoka."