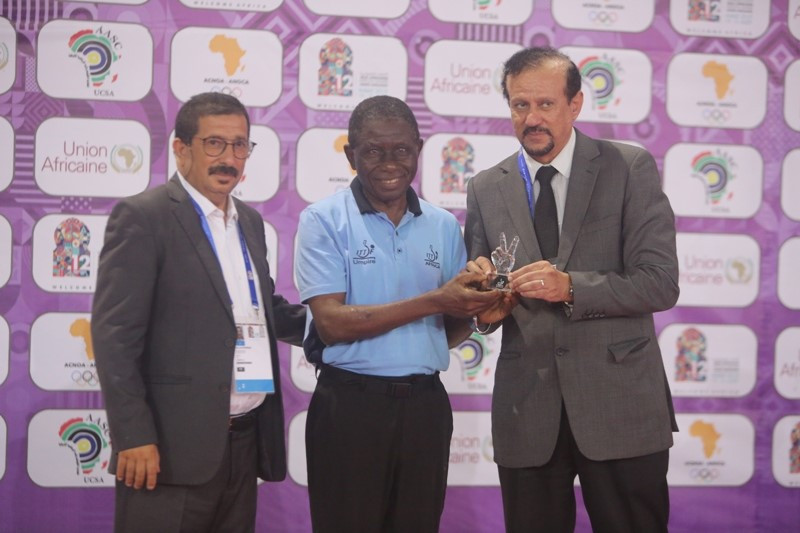 The African Table Tennis Federation (ATTF) has acknowledged the immense contribution of Nigerian umpire John Peters and his four decades of service.

At the grand finale of the table tennis event at the ongoing African Games in Morocco's capital Rabat, Peters was honoured by ATTF President Khaled El-Salhy.

The 73-year-old, who was on duty at his seventh African Games, was described as a role model to upcoming umpires in Africa with his conduct and composure.

"I want to commend Peters for his meritorious service to table tennis," El-Salhy said.

"For more than 40 years, Peters has been around table tennis and has contributed immensely to officiating in Nigeria and Africa.

"Despite his age, he is still relevant in the scheme of things in Africa and I must commend him, and I hope other young umpire will take a cue from him."

Peters, the statistics graduate of Nigeria's premier tertiary institution, the University of Ibadan, launched his foray into umpiring in 1973 as part of the technical team at the African Games in Lagos in Nigeria.

"I could remember vividly that my first contact with table tennis was in 1958 when I saw my schoolmates using our teacher's table to play the game," Peters said.

"I quickly fell in love with the sport.

"Soon, I started beating everybody in my class.

"Unfortunately, we never had any organised tournaments."

He added: "Even in the university I was still involved in the sport, having joined the then Nigeria Electric Power Authority (NEPA) as a member of staff.

"My involvement in the sport at NEPA really helped me.

"In 1972, the then President of the Nigeria Table Tennis Federation, Dr Adegboyega Efunkoya, wanted to train a select group of people in umpiring and I was part of the team trained in administering the sport.

After becoming a national umpire, Peters soon made the cut as one of the umpires for the 1973 African Games.

"I made my international debut as an umpire in 1973 and have been officiating table tennis since then," he said.

"I must admit that table tennis has taken me around the whole world.

"So for me, table tennis is life and that is why I cannot stop my romance with the sport."

Apart from his continental duties, Peters handled matches at the Delhi 2010 and Glasgow 2014 Commonwealth Games.

The only male Nigerian blue badge umpire was also at the Rio 2016 Olympic Games and is not quitting the sport any time soon.

"Fortunately, there is no retirement age in umpiring," Peters said.