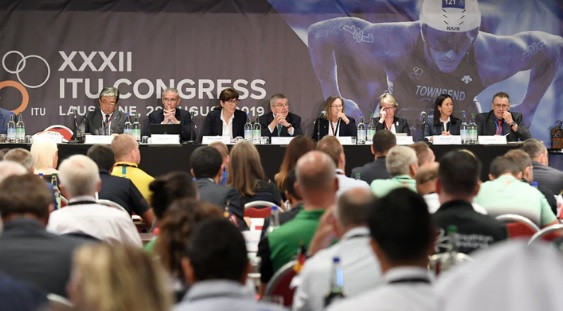 Bach, who was a guest at the Congress, claimed the ITU was "maybe the International Federation (IF) which has most embraced" the Agenda 2020 reform process.

The IOC President also hailed the work the ITU has done with its governance and gender equality.

Casado, a member of the IOC, is the only female President of a Summer Olympic IF.

"The IOC is proud of the close cooperation it has with the ITU in respect of good governance as well as gender equality, which is in the interests of every organisation," Bach said.

"So I thank Marisol Casado for all she is doing with ITU.”

The competition in the Japanese capital was shortened because of the heat, while the swimming section of the Paratriathlon event was cancelled due to concerns over bacteria levels in the water at Tokyo Bay.

ITU officials deemed the water quality and temperature at the course to be within regulations for the triathlon race.

The ITU also accepted American Samoa as its 172nd member and approved the calendar for the 2020 World Cup and Paratriathlon season.

Next year's circuit will begin in Cape Town in South Africa in February and will conclude in Japan in October.

A total of 15 World Cups will be held in 2020 across the Olympic and sprint distances.

Eight Paratriathlon competitions will be staged next year, including the World Championships in Milan in May.