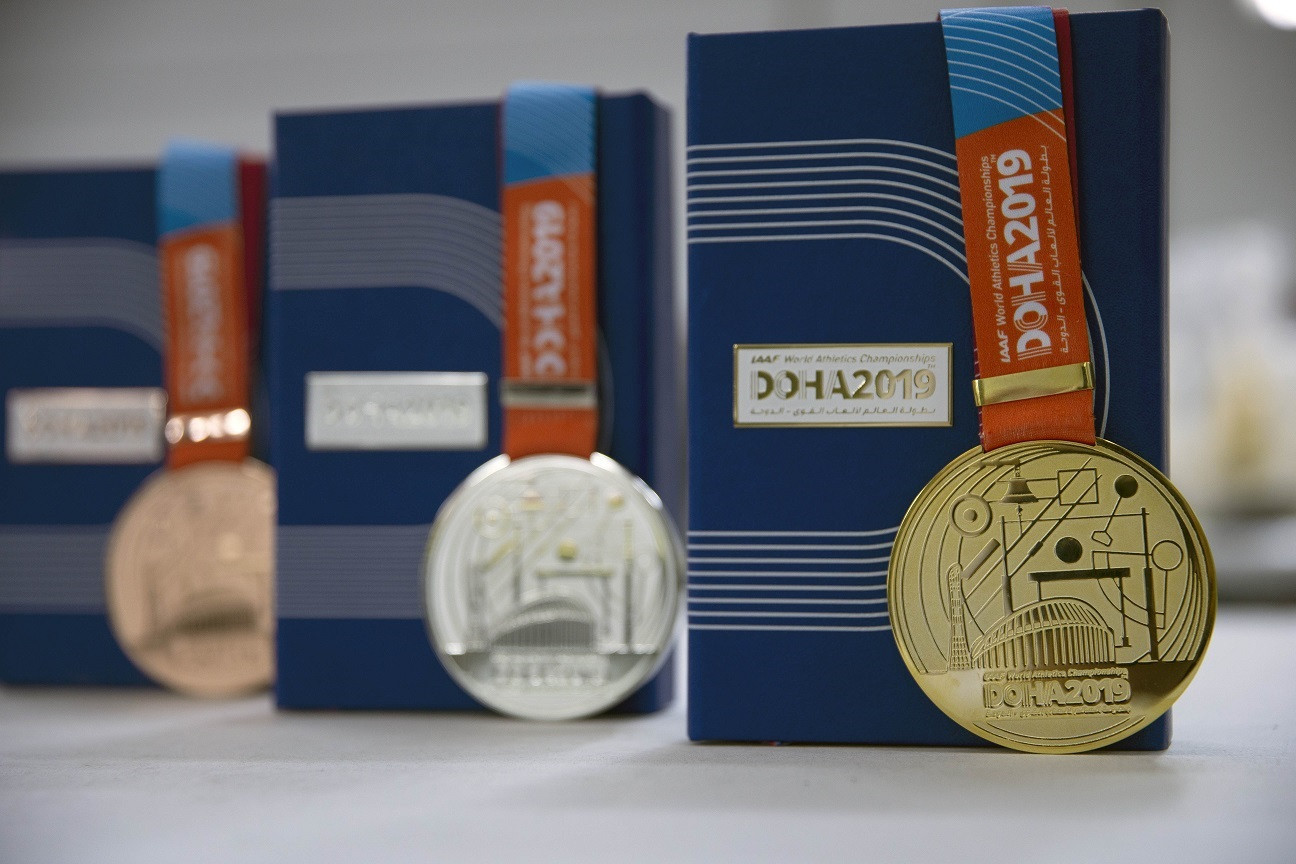 Organisers of the 2019 International Association of Athletics Federations (IAAF) World Championships in Doha have marked one month to go until the event by revealing the design of the medals.

More than 2,000 of the world's top athletes will compete for 192 medals across 49 finals during the 10-day competition, starting on September 27.

Paying homage to the Qatari capital, the gold, silver and bronze medals were designed by an all-female branding team and showcase the Doha skyline, which will be the backdrop of the marathon and racewalk events.

There are also illustrations of the iconic Khalifa International Stadium, which will host the IAAF World Championships as they head to the Middle East for the first time.

Thirteen different elements of athletics disciplines are weaved into the design.

Specially handcrafted in Doha by Sndala, the local company has incorporated traditional Arabic Sadu patterns with a modern sporting twist.

"A medal is the symbol of excellence in our sport," IAAF President Sebastian Coe said.

"It represents all the years of sweat, striving and persistence required to succeed in athletics at the highest level.

"So, the design of the medals must be as special as the achievement in winning them.

"Our Local Organising Committee in Doha has done a brilliant job in creating medals that our athletes will be proud to receive as a permanent keepsake of their moment of glory.

"I’d like to have one myself, so I may have to come out of retirement."

Sheikha Asma Al Thani, director of marketing and communications for the Local Organising Committee, added: "Having designs on the medals which showcase Qatar is a special occasion for the country, as so many people throughout Doha have played a vital role in delivering the competition.

"A gold medal will naturally take pride of place in an athlete’s collection and they will be reminded of the competition being held in the Middle East forever.

"The whole of Qatar is excited to welcome the world’s best athletes and we look forward to celebrating the successes of all those competing and those iconic moments at the finish lines and on the podiums."

The first gold, silver and bronze medals will be won just hours after the 2019 IAAF World Championships get underway on day one, with the world's first midnight marathon taking place along the Doha Corniche.

The marathon and racewalk events are free for all to attend.

Finals will be held at the Khalifa International Stadium every evening, with tickets available from QAR60 (£13/$16/€15).

Tickets will also give spectators access to the World Athletics Village outside the stadium, where a host of international cuisines will be available to celebrate the global event, along with live entertainment and competitions.

Doha was awarded the hosting rights to the 2019 IAAF World Championships in November 2014.

It came after the city beat rivals Barcelona and Eugene in a secret ballot vote at an IAAF Council meeting in Monaco.

Three years earlier, Doha lost out on the contest for the 2017 IAAF World Championships to London.