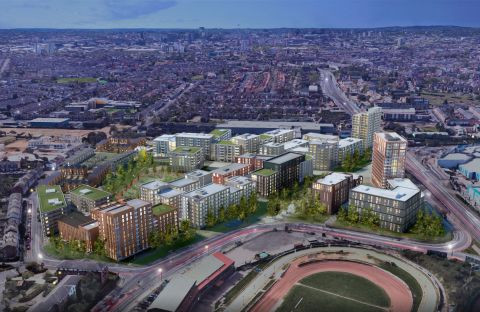 The facility will offer people the opportunity to learn valuable construction skills, according to the West Midlands Combined Authority (WMCA).

Funding has been awarded through the Construction Skills Fund for the facility on the outskirts of the city.

Birmingham City Council (BCC), the United Kingdom Government and the WMCA have formed a partnership to invest £496 million ($606 million/€546 million) in a regeneration project aimed at delivering long-term benefits to local people, in the run-up to the Games.

The fund will support 26 training projects across the country with the aim of training 13,000 people to be ready for employment in construction by March 2020.

As part of the training, participants who complete a 20-day course will be guaranteed a job interview.

Imaan Khan and Zubar Akram are among the first batch of trainees and they joined Mayor of the West Midlands Andy Street for the hub's official opening.

"The Perry Barr Residential Scheme will be a game-changer, with a lasting housing and regeneration legacy," Street said.

"To maximise that legacy, it’s vital that local people have the opportunity to benefit from this kind of investment in the West Midlands.

"We know the construction industry in our region will need 50,000 more trained staff by 2030.

"This training hub will give local people the chance to get involved in this growing sector.

"They can learn new construction skills for free, get real-world experience on a construction site, and have an interview for a great job at the end of their course."

As part of the training course, novice construction workers will learn about civil engineering, setting a site out and form-work.

The hub will advertise local job opportunities, and will initially focus on training unemployed people.

"It is pleasing that a major regeneration project being overseen by the city council is able to play a key role in nurturing and developing the next generation of talent within the construction industry, BCC leader and WMCA portfolio holder for transport Ian Ward said.

"The Perry Barr scheme will act as a catalyst for further investment into Birmingham and we need to have the right skills within the local workforce if we are to be ready to deliver the next wave of projects that come to the city and wider region."