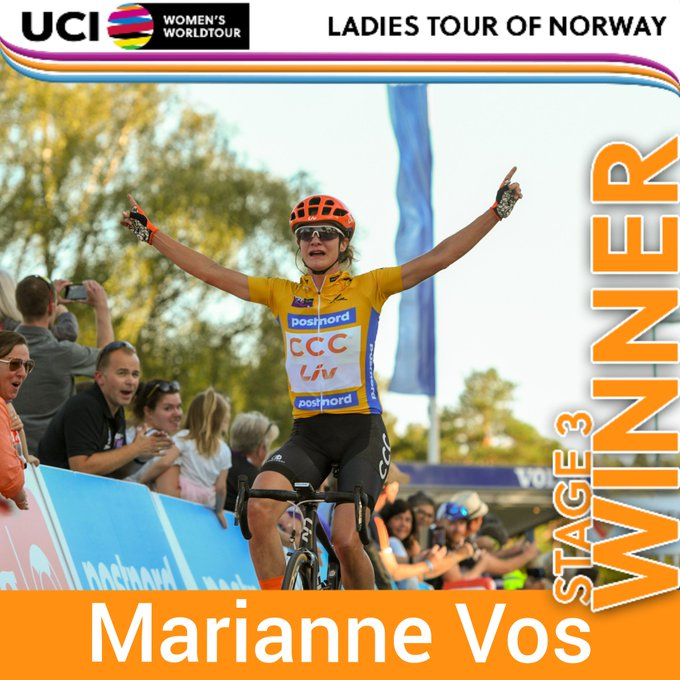 Marianne Vos strengthened her grip on the Ladies Tour of Norway by winning a second consecutive stage.

The Dutch rider took the overall race lead yesterday by triumphing in Askim, but had the same time in general classification as stage one winner Lorena Wiebes.

Vos went on the offensive again on today's 125 kilometre stage from Moss to Halden, with the CCC-Liv rider attacking in the closing stages.

She launched her effort on the first climb to the Fredriksten Fortress, where the stage concluded.

United States' Coryn Rivera was able to follow Vos’ move and the pair worked together to establish a lead over the chasing pack.

The duo would turn from allies into rivals in the final kilometre, as they battled for the stage victory.

Vos emerged as winner of the sprint as the London 2012 Olympic champion crossed in a time of 3 hours, 24 min and 20 sec.

💛 The best way to defend a yellow jersey is winning the stage - cycling phrases, chapter 1. @CCCLivTeam's @marianne_vos knows that and did so at Fredriksten Fortress in Halden! #UCIWWT #LToN19 pic.twitter.com/b7y3jcRHWK

She would finish four seconds clear of Rivera.

The Netherlands' Demi Vollering led the chasing pack across the line at 11 seconds behind the stage winner.

Vos will take a 19-second lead into the final stage, as she looks to win the race for a third successive year.

Rivera rose to second place overall following the penultimate stage, while Canada's Leah Kirchmann is third at 31 seconds down.

The race will conclude with a 154km stage from Svinesund to Halden.