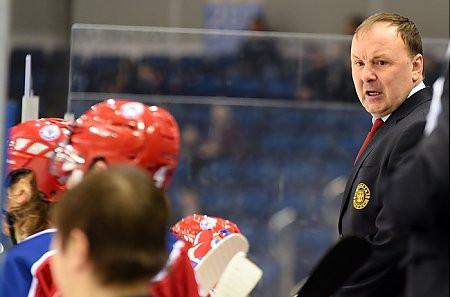 Mikhail Zakharov has been re-appointed as the head coach of the Belarus men's ice hockey team.

The 57-year-old has signed a two-year deal and will work towards the 2020 World Championships in Switzerland.

Belarus returned to the top tier of the flagship event after winning promotion but head coach Alexander Sidorenko still left the set-up after his contract expired.

Zakharov will also have one eye on the 2021 World Championships, which Belarus will co-host with Latvia, while qualification for the Beijing 2022 Winter Olympics will take place in August next year.

He was the unanimous choice of the Belarusian Ice Hockey Association and boasts a fine club record.

The Kazakhstan-born coach will continue to coach his club who will play in the Champions Hockey League next season.

A former player in the Soviet Union's junior team, he has previously coached Belarus at the 2004 and 2005 World Championships and the Vancouver 2010 Winter Olympics.

"The 2021 World Championship will be held in Minsk, we talked a lot with the colleagues, today our hockey has stalled.

"But we will not look at this, we will work and move on.

"Nobody gives up, there are tasks and we will fulfill them together with the coaches and the federation.

"When we all become one unit, these tasks become possible."

Belarus will play with Canada, Sweden, Czech Republic, Germany, Slovakia, Denmark and Britain in Group A of next year's World Championship in Switzerland.

Their Beijing 2022 qualification group includes hosts Slovakia, Austria and a qualifier still to be determined.