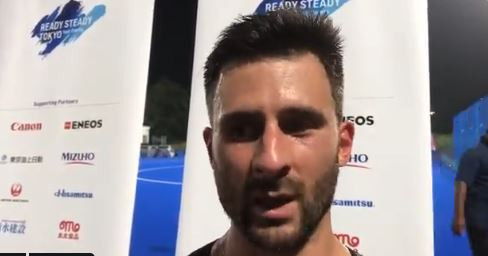 Japan’s men suffered defeat in their opening match at the Tokyo 2020 hockey test event at the newly-built Oi Hockey Stadium that will host the Olympic tournament next year.

Having come from 2-0 down to lead New Zealand 3-2, the hosts shipped two late goals, with the winner coming in the last minute.

Stephen Jenness was the man who scored the decisive final goal after his team mate Kane Russell had brought the Kiwis level three minutes earlier.

Jakob Smith and Shea McAleese found the net to put New Zealand 2-0 up at half-time before goals in the third quarter – two from Koji Yamasaki and one from Hirotaka Wakuri – raised home hopes of victory.

Japan’s women also suffered defeat, going down 2-1 to India in the opening match of the competition, which is part of the Ready Steady Tokyo series of test events for the 2020 Olympic and Paralympic Games.

Japan’s Captain Yukari Mano: “We’re very happy to have been able to play on this nice pitch. Unfortunately, we could not win this first game but our objective is to win the tournament.”#ReadySteadyTokyo #Tokyo2020 @Olympics @Tokyo2020 @Japan_hockey pic.twitter.com/tHgjZJjM3f

Goals from penalty corner specialist Gurjit Kaur, either side of a strike from Aki Mitsuhashi, earned India victory.

India’s men recorded a 6-0 win over Malaysia, scoring three of their goals in the final quarter.

The Indian side had scored a goal in each quarter through Varun Kumar, Gursahibjit Singh and Mandeep Singh, with the latter two adding further late goals along with Sunil Sowmarpet.

Two goals in the final quarter from Australia’s Savannah Fitzpatrick and Ambrosia Malone were not enough to avert defeat for the women’s world ranked second team as they lost 3-2 to China.

Bingfeng Gu, Tiantian Luo and Jiaqi Zhong got on the scoresheet for the Asian nation.