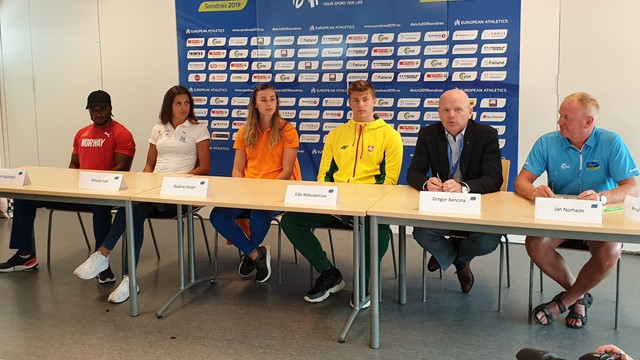 Kashafali claimed the eighth and last qualifying place with a time of 10.81sec into a 1.3mps headwind.

“I wanted to execute my race better,” said the 25-year-old refugee from the Congo, who has set successive T12 world records of 10.58 and 10.46 after being classified as a Para athlete earlier this year because of a degenerative eye disease.

“I dipped too soon because I made a mistake with the line.

“I’m really disappointed with myself.

“I should have checked it out earlier.”

Kashafali, who was running in lane five, cost himself significant time after being confused by the curved, broken line just short of the main finishing line that marks the gathering point for 10,000m runners before they advance to their start.

His selection for the main team, announced here on the eve of competition, means he has matched the rare feat first accomplished by US middle distance athlete Marla Runyan of competing in a main international competition as a visually-impaired athlete.

Runyan, five times a Paralympic champion, subsequently became the first legally blind athlete to compete in the Olympics when she took part in the 1,500m at the 2000 Sydney Games, finishing eighth in the final.

Kashafali, 25, arrived in Norway as a refugee from the Congo when he was 11 and competed for a number of years before being re-classified.

He set a world record of 10.58 in his first Para race in Switzerland and he improved that to 10.46 at the Oslo meeting in June.

Last weekend he won the main national title, beating the original selection for the 100m here, 10.22 runner Jonathan Quarcoo, who has since ended his season early because of injury.

“It means a lot to me in many ways,” said Kashafali.

“Especially as the competition is on home soil.

“It’s been a long road for me.

“To be racing against this calibre of athlete, to be competing with some of the best sprinters in Europe, and to show myself as a Para athlete, means more to me than I can describe.

“It’s all about the team, it’s about being here and being a part of it.

“I never expected to compete at this level but I have the chance to show that even though I am visually impaired I can still race against the best.

“Everybody has their own challenges - it’s about how you look at it.

“In my way I have faith in God.

“I train hard, I see an opportunity and do my best.

“Everything is possible - it doesn’t matter if you cannot see, cannot walk, you can always do something, get up and train and do enough to succeed.”