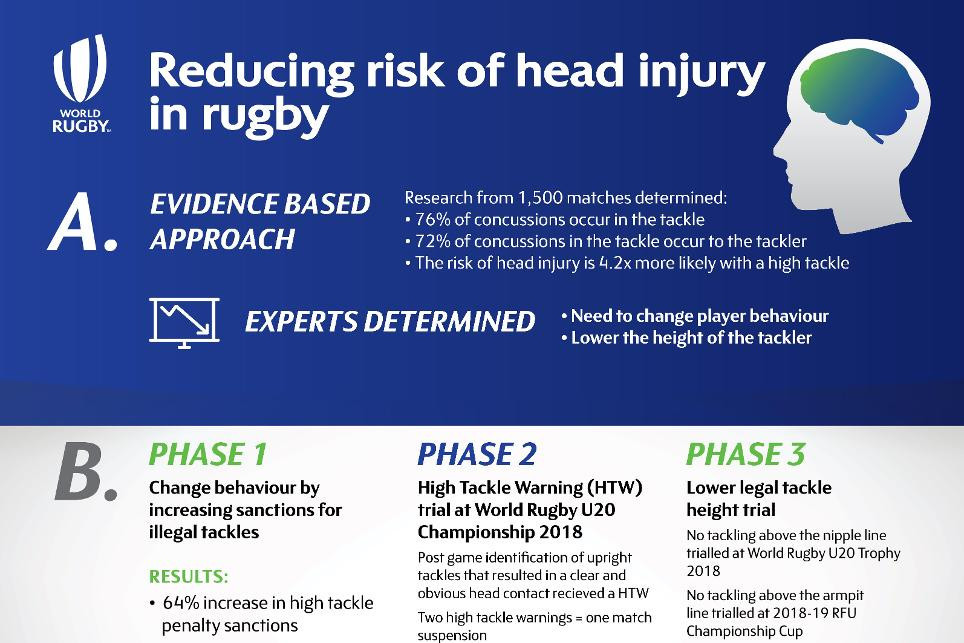 A key pillar of World Rugby's five-point injury-prevention strategy, the programme focuses on reducing the impact of training on injuries.

"Training accounts for approximately 89 to 95 per cent of total elite player workload and research demonstrates a strong correlation between poor individual player load management and injuries, both within the match and training environments, many of which are deemed 'controllable'," a statement from the governing body reads.

Developed by a multi-disciplinary expert group, including top coaches, players, medical, research and law specialists, the Train Smart. Play Smart programme is a user-friendly practical resource for coaches and players at all levels, aimed at driving positive load management approach and behaviour change.

The guidance is based on 10 principles and, it is claimed, will enable coaches to successfully manage training load, recognising that some players are at greater risk of injury based on variables such as returning from injury, age and injury history.

As a user-friendly resource, it provides education on common load contributors, advice on how to effectively measure player load and offers simple guidance and techniques for coaches from training and match management to lifestyle factors.

As announced in January, any player competing at the 2019 Rugby World Cup in Japan must have a "load passport" to encourage best-practice training load management between club and country environments, while all unions are encouraged to optimally manage load between club and national team environments based on published best-practice and guidance.

"World Rugby is committed to evidence-based injury-prevention programmes and the load guidance is an excellent example of that approach, game-wide collaboration and practical advice that can benefit the whole game," World Rugby chairman Sir Bill Beaumont said.

"We urge everyone in the game to take this seriously."

IRP chief executive Omar Hassanein added: "This group was formed amid concerns from our senior players that sectors of both the amateur and professional game demonstrate poor player workload management.

"These guidelines, developed by educated people in the field, are designed to help coaches with their ongoing planning whilst equally identifying red flag situations.

"The culture of over-burdening players to the detriment of both their health and performance must be removed from all forms of the game."

The document also focuses on identifying high-risk athletes, such as players involved in multiple-teams – international elite players, young elite players as well as players returning from injury, veteran players and those who have recently moved to a higher level of competition.

"A successful injury-prevention strategy is not simply about reducing match time as training accounts for up to 85 per cent of all player load," Martin Raftery, World Rugby's chief medical officer, said.

"This holistic programme is about reducing injuries through management of training load and as a consequence improving player performance and long-term well-being.

"Ultimately, it is about changing culture, just as we have been doing with regards to concussion."

Ireland head coach Joe Schmidt, a member of the working group added: "Players who are well managed tend to perform more consistently and get injured less often, though it’s a collision sport and you can’t completely mitigate against injury.

"Planning and preparation are key.

"Any spike, whether it’s in training load or on match-day, is a red flag for risk.

"Players should progress gradually to build robustness because if they don’t, they are more likely to injure themselves.

"This is as applicable to the amateur game as it is to the professional game.

"If you can manage load, so players are physically and mentally able to cope, then they’re going to enjoy the game and perform better."

World Rugby promised in March it would analyse a package of evidence-based injury-prevention proposals after a three-day player welfare symposium in Paris.

They discussed the latest shape of the game and injury data before considering potential injury-prevention focus areas within the next four-year law amendment review cycle, due to begin after the 2019 Rugby World Cup.