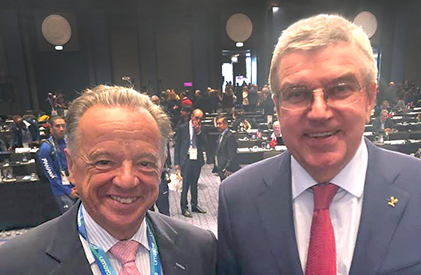 The pair met during the Panam Sports General Assembly, taking place on the eve of the Lima 2019 Opening Ceremony.

They discussed the upcoming competition, in which bodybuilding is appearing for the first time.

Two sets of medals are to be awarded, one in men's classic bodybuilding and the other in women's bikini fitness.

Taking place at Coliseo Mariscal Caceres on August 10, some 32 athletes are expected to compete.

Bodybuilding is one of 39 sports featuring at Lima 2019, with action lasting until August 11.

Despite being included on the Lima 2019, bodybuilding was omitted from the initial programme for Santiago 2023.