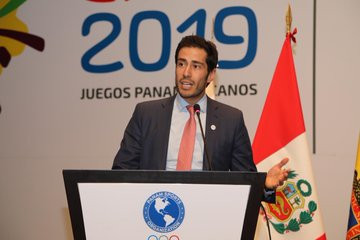 Santiago 2023 could be the latest Pan American Games in the calendar year to date after organisers suggested a November finish to the Panam Sports General Assembly here.

The dates of October 22 to November 5 were proposed to the General Assembly, meeting on the eve of the 2019 Pan American Games.

Santiago 2023 chief executive Eduardo Della Maggiora made the suggestion, explaining that the decision was made after Santiago's weather conditions had been taken into consideration.

The majority of Pan American Games have been held in July and August, with Guadalajara 2011 the latest to take place so far after running from October 14 to 30.

It was also revealed that ninety per cent of venues for the Games will already be existing.

Venues will be organised into five main clusters, one of which will be centred around the Chilean city's national stadium, Estadio Nacional Julio Martínez Prádanos.

Each cluster will be easily accessible through public transport links, with four out of the five located in a 15 kilometre radius from the Athletes' Village.

The delegation then talked through their visual identity after launching the Santiago 2023 logo last week.

The logo aims to portray Santiago as a vibrant, modern, entertaining and multicultural city that connects with its residents and visitors.

Plans for the Athletes' Village were revealed in March with a forecast cost of $180 million (£136 million/€160 million), expected to be achieved by a mix of public and private financing.

Santiago was confirmed as host in November 2017 after its bid was unanimously approved by Panam Sports.

The city was the sole bidder for the 19th edition of the Games, following the withdrawal of Buenos Aires.

With plans progressing in Santiago, Lima is on the verge of hosting its own edition of the multi-sport competition.

The Opening Ceremony will take place this evening at Estadio Nacional del Perú, marking the start of 16 days of 39 sports, contested by around 6,700 athletes.

Santiago will take part in Lima's 2019 observer programme here, which aims to teach participants "what it takes to stage a successful, cost-efficient Games with lasting positive impacts on host communities."

They will also receive one additional day of programming at a dedicated Pan American Games workshop on Monday (July 29).