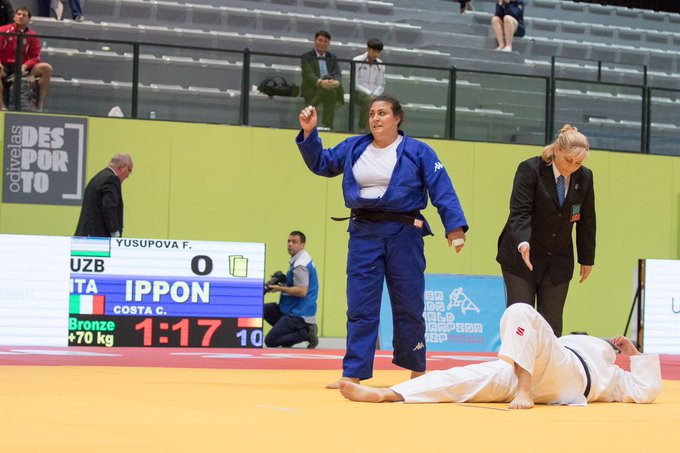 Italy has named a team of 11 judoka to compete at their home International Blind Sports Federation (IBSA) Judo European Championships in Genoa starting tomorrow and finishing on Sunday (July 28).

The delegates will join judoka from 17 other countries who will compete at RDS Stadium in a competition that offers qualification  points for the Tokyo 2020 Paralympics.

Headlining the hosts’ squad is Carolina Costa in the women’s over-70kg.

She continued her medal-winning ways at the Grand Prix in Baku, Azerbaijan, in May with gold and at the International Qualifier for the Tokyo 2020 Paralympics in Fort Wayne, United States, earlier this month with another bronze.

Genoese fans will follow closely the journey of local athlete Asia Giordano in the women’s under-48kg.

Romania's European champion Alex Bologa will let his judo do the talking when he lines-up in Genova this week to try to defend his title.

Dong Dong Camanni will be the youngest on the team, making his international debut in the men’s up to 66kg at the age of 16.

Romania's Alex Bologa will be among returning and defending champions.

The Teatro Modena, a theatre in Genoa Sampierdarena, will host tomorrow’s Opening Ceremony, which is directed by Giorgio Gallione.

The Italian Sports Federation for the Blind and Visually Impaired, led by President Sandro Di Girolamo, has also enlisted local schools to provide volunteers for the event and a number of local and national partners are involved.

After three sessions of sight classification, competition will begin in 13 weight categories.