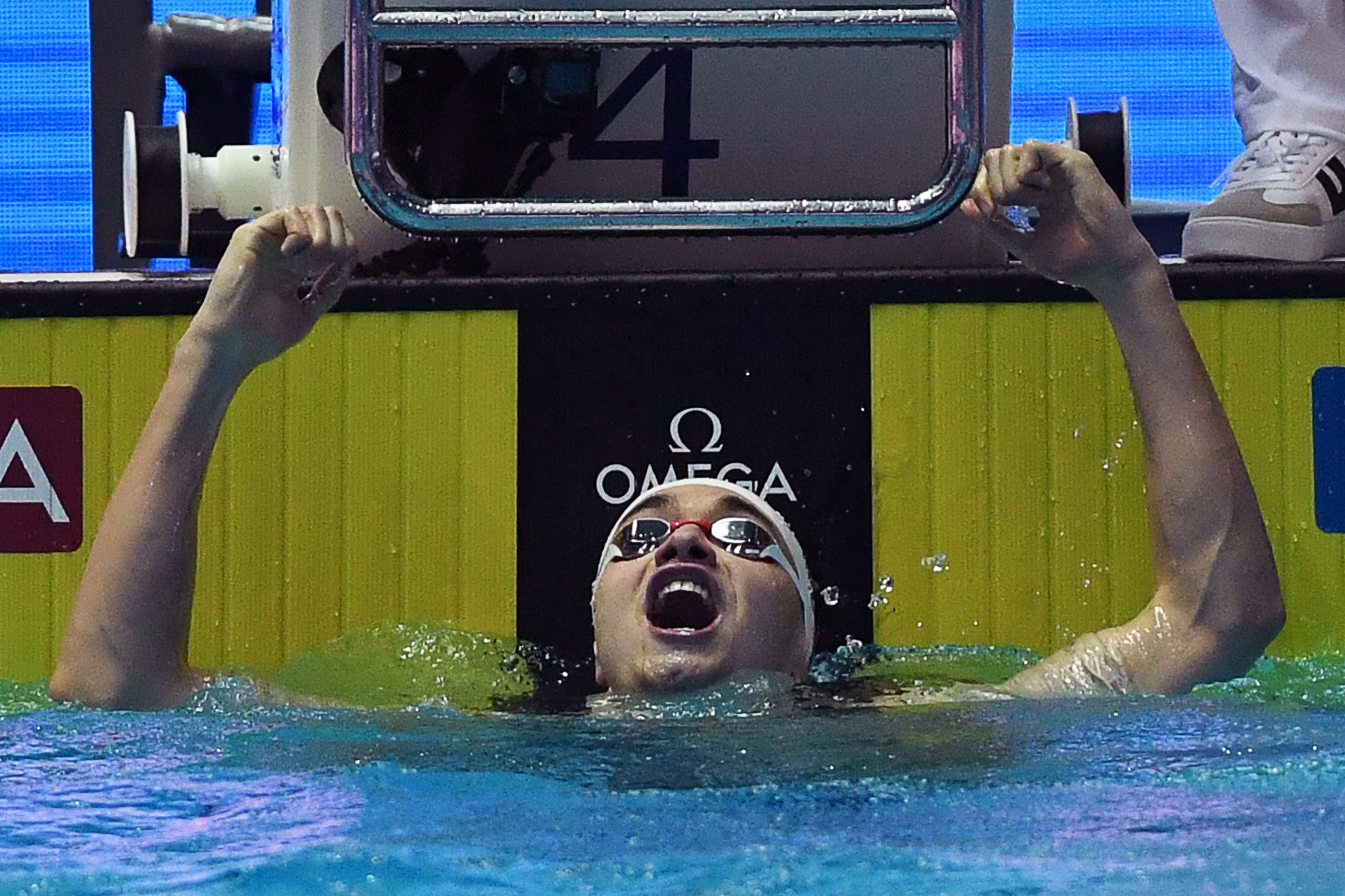 The 19-year-old clocked 1min 50.73sec at the Nambu University Municipal Aquatics Center to eclipse the mark set by the American icon, the world's most decorated Olympian, at the Rome World Championships in 2009.

Phelps, who boasts 23 Olympic gold medals and 26 world titles, swam 1:51.51 in the Italian capital 10 years ago but that record has now been erased after Milák zipped through the water in South Korea.

The teenager won the European gold medal in the event in Glasgow last year and has now added a first global title.

"I was waiting for the pain to come, the fatigue, but I got adrenaline."

Other action today saw Britain's Adam Peaty complete the 50m/100m breaststroke double for the third World Championship in a row.

He won the shorter distance in a time of 26.06sec to win a seventh world title in all.

The other two individual gold medals today were won by Italy who triumphed in the women's 200m freestyle and men's 800m freestyle.

Federica Pellegrini defended her gold medal in the former and won her sixth world title in all with a time of 1:54.22.

Ariarne Titmus, the 400m freestyle champion from Gwangju, clocked 1:54.66 to win silver for Australia as Sweden's Sarah Sjöström picked up bronze in 1:54.78.

There was no Katie Ledecky as the American five-time Olympic champion has still not recovered from illness.

This is his first world title over the distance after bronze last time in 2017 and two golds over 1,500m.

Norway's Henrik Christiansen swam a national record of 7:41.28 for silver with France's David Aubry doing likewise for bronze in 7:42.08.

China's controversial Sun Yang failed in his bid to win a third Gwangju gold as he came home sixth.

Both Australia's Mack Horton and Britain's Duncan Scott have publicly protested against Sun during medal ceremonies at the Championships with the Chinese accused of deliberately smashing his blood sample after an argument with drug testers earlier this year.

Sun, who denies the allegations, served a three-month drugs ban in 2014 and his latest case is currently at the Court of Arbitration for Sport on behalf of the World Anti-Doping Agency, following FINA's decision to only issue a warning.

The final medal from the pool came in the mixed 4x100m medley relay where gold went to Australia.

Their quartet of Mitch Larkin, Matthew Wilson, Emma McKeon and Cate Campbell clocked 3:39.08 to fend off the US and Britain.

McKeon and Campbell both won their second golds of the Championships after appearing in Australia's winning women's 4x100m freestyle team.

Gold was also awarded at the high diving today as Britain's Gary Hunt won the men's event to reclaim his title from 2015.

He performed a triple quad with his last dive to receive three perfect 10s from the judges and end on a score of 442.20.

American defending champion Steven LoBue had to make do with silver this time on 433.65 as Mexico's Jonathan Paredes took bronze on 430.15.

"It's hard to explain your feelings after such a final," said Hunt after his win at the Chosun University Football Field.

"I was a bit disappointed after the first two rounds, but I decided I should fight until the end."

At the water polo, the women's semi-finals were held at Nambu University with defending champions United States earning the chance to retain their gold medals.

The Americans, also the reigning Olympic and World League champions, eased past Australia 7-2.

They will now meet a Spanish side who won their last four clash 16-10 against Hungary.

The men's water polo semi-finals will also be held with Spain taking on Croatia and Hungary meeting Italy.