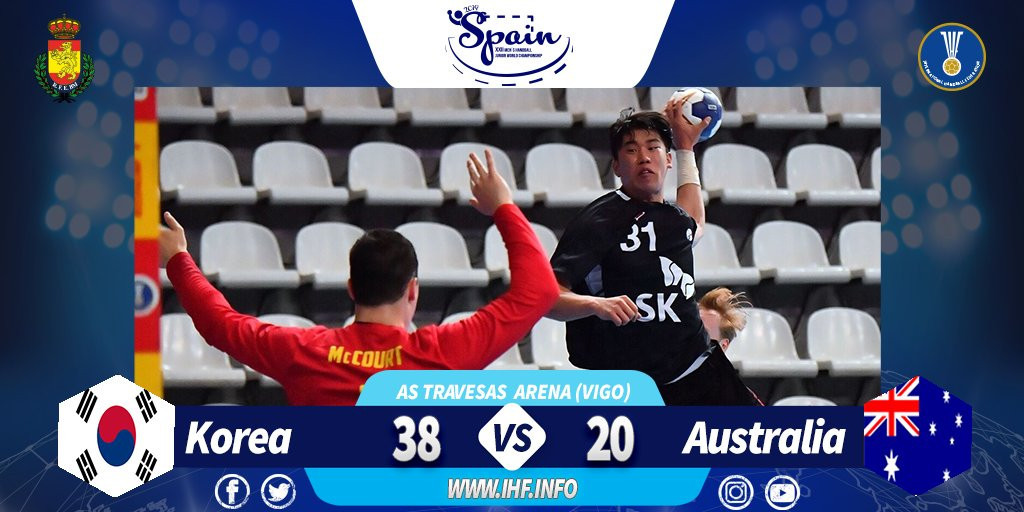 South Korea today claimed the 16th and final place in the knockout phase of the Men’s Junior World Handball Championship in Spain after beating Australia 38-20 at the Complejo Deportivo de As Travesas in Vigo.

The win assured South Korea of fourth place in Group B above Nigeria, one of the top 16 seeds, who lost 25-41 to Sweden.

South Korea’s opponents on Thursday (July 25) in this International Handball Federation event are scheduled to be Slovenia, who beat the hosts and defending champions Spain 22-21 in a thrilling match to finish top of Group A.

Spain will now meet France, who finished third in Group B after losing 32-37 to Egypt.

The African champions, who topped Group B with five wins from five, meet Serbia, who finished fourth in Group A after losing their final qualifying match 23-29 to Tunisia today.

Slovenia wins 22:21 over the defending champions and is now the only undefeated team in Group A 💪🏼🔥🇸🇮#Spain2019 #handtastic pic.twitter.com/P2ob0cIbdc

Portugal, beaten 32-30 by Croatia in their final Group C match, will meet Germany, 26-17 winners over Iceland in their last Group D match.

Sweden’s last 16 opponents will be Tunisia, while Croatia and Iceland meet in the last of the knockout matches.

The final is due to be played next Sunday (July 28) in Vigo.