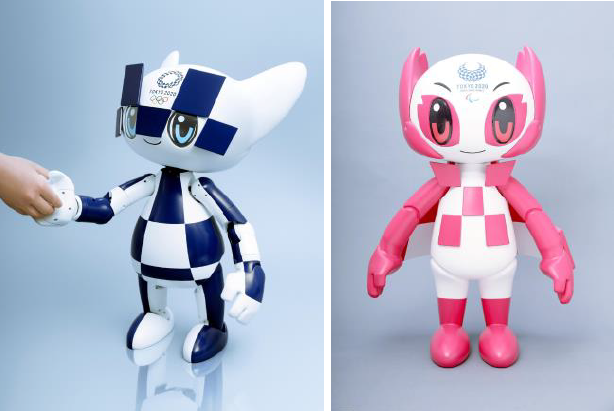 Tokyo 2020 has today unveiled four new futuristic robots which will be deployed to assist spectators, athletes and officials at competition venues and to relay sound, images and physical feedback from venues to those watching remotely.

The new models include robots based on Tokyo 2020 mascots Miraitowa and Someity and developed by Toyota Motor Corporation.

The Japanese multinational automotive manufacturer is an industry expert in the field of robot technology and is providing support for the "Tokyo 2020 Robot Project", launched in March with the aim of ensuring next year’s Olympics and Paralympics will be the most innovative ever.

Tokyo 2020 mascot-type robots will welcome athletes and guests at Games venues and other Games-related locations with human-like movements such as shaking hands and waving, and with a variety of facial expressions.

Cameras mounted on the robots' foreheads will allow them to recognise when people are nearby and to react to them.

Tokyo 2020 and Toyota are additionally discussing a number of ways for the mascot-type robots to make it easier and more enjoyable for children to experience the Games.

Another model - the T-HR3 Humanoid robot - will transmit sounds and images from Games locations to partner robots at remote locations.

Tokyo 2020 is also considering having them mirror each other’s physical movements.

It is claimed this will allow those at remote locations who interact with the T-HR3 Humanoid robots to feel as if they are physically present at Games-related locations.

A third model – the T-TR1 robot – is a virtual mobility robot developed by Toyota Research Institute in the United States.

It will be equipped with a camera atop a large, almost life-size display.

By projecting an image of a user from a remote location, the robot will help that person feel more physically present at its location.

The T-TR1 robot will give people that are physically unable to be present at Games-related locations a chance to virtually attend, with an on-screen facility allowing conversations between the two locations.

Completing the robot line-up will be the Field Support robot, which will be equipped with automatic driving functionality that will allow it to assist at throwing events at the Olympic Stadium.

The robots will determine the optimal path to follow when retrieving items such as hammers or javelins thrown by athletes, guiding staff along paths that avoid obstacles.

Tokyo 2020 and Toyota will be working with the International Association of Athletics Federations in developing the Field Support robot for the Games.

"Humans are better suited to picking up heavy equipment from the field, but for quickly transporting them to their respective return depots, that’s a job that’s best performed by robots," Takeshi Kuwabara, a project planning manager who oversaw the robot’s development, was reported as saying by Reuters.

"Our aim was to leverage the strengths of both humans and robots."

The Robot Project, it is claimed, will help realise one of core visions of Tokyo 2020, "Unity in Diversity", as the organisers aim to foster a welcoming environment for all athletes, visitors and those unable to attend venues who want to experience the Games remotely at other locations in Japan.

It brings together experts in the field of robotics and is supported by Japan's Cabinet Secretariat, the Ministry of Education, Culture, Sports, Science and Technology, the Ministry of Economy, Trade and Industry, the Tokyo Metropolitan Government, Panasonic, Toyota and Tokyo 2020.

Other new robots being deployed as part of the Robot Project are scheduled to be announced in the near future.