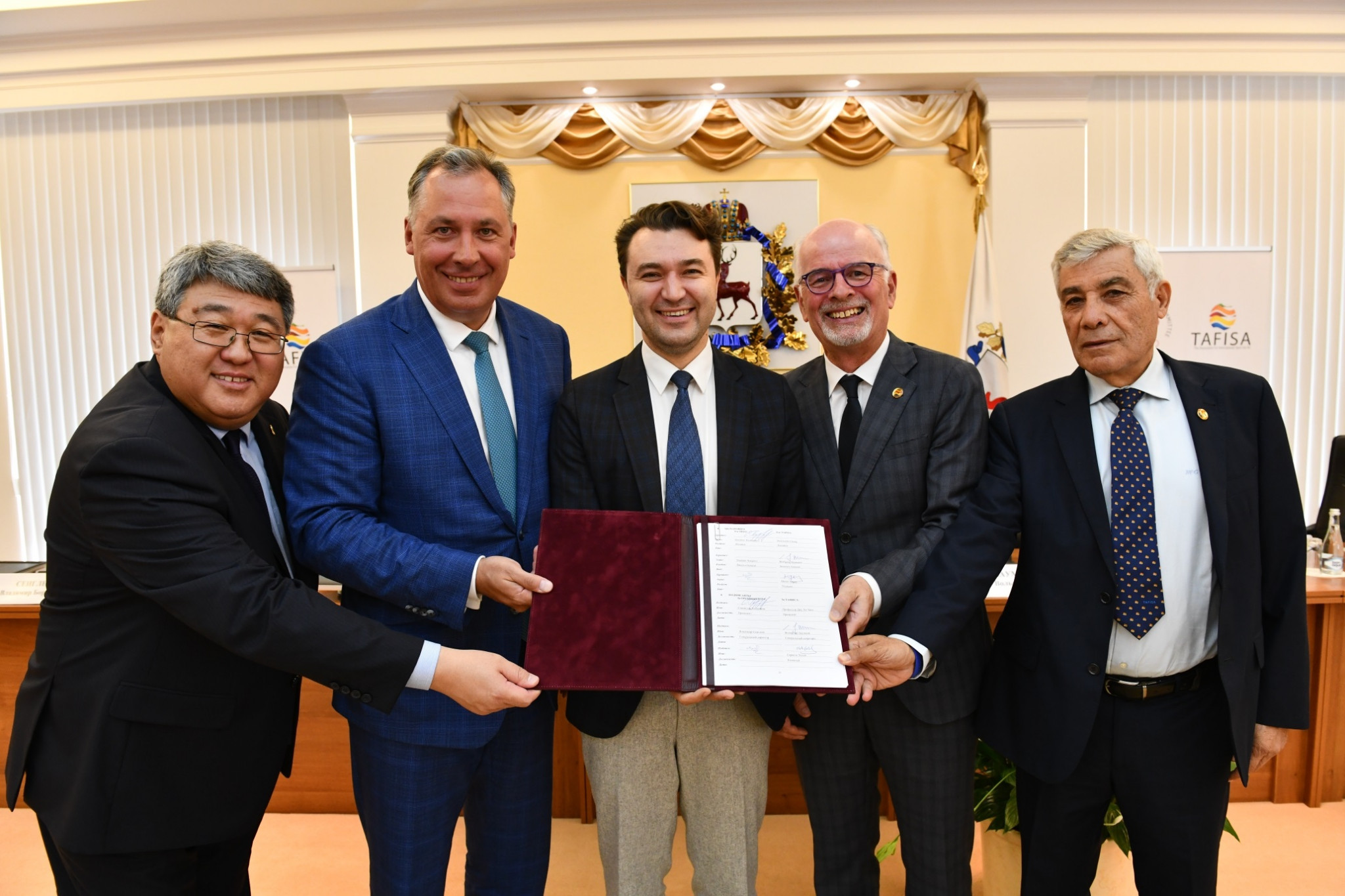 The Russian Olympic Committee (ROC) has submitted a bid to host the 2024 edition of The Association For International Sport for All (TAFISA) World Games in Nizhny Novgorod, a city that staged several matches during the 2018 FIFA World Cup.

A contract between the ROC and TAFISA was signed at the Nizhny Novgorod Kremlin to confirm the bid.

The host city of the 2024 TAFISA World Games is due to be officially announced at the organisation’s General Assembly in Tokyo in November.

Pozdnyakov stressed that the agreement between the ROC and TAFISA is a pre-condition for Russia’s participation in the bidding campaign and will only enter into force if the country wins the right to host the event in five years' time.

"We have taken another important step towards the goal set forth by the Russian Olympic Committee considered to be of the highest priority in terms of the development and promotion of mass sports," he said.

"I must express gratitude to the leadership of TAFISA – in the era of globalisation they do not forget about the national colours.

"The TAFISA World Games provide a unique opportunity to show the whole world the diversity of sports and the national traditions of the host country, to strengthen cultural and sports ties between nations and individual regions.

"The following fact about the popularity of the Games says it all: three years ago, 60 countries of the world took part in the sixth TAFISA Games, which took place in Jakarta, Indonesia.

"We hope that in five years, participants from 100 countries will come to Nizhny Novgorod."

The TAFISA World Games, supported by the International Olympic Committee (IOC) and UNESCO, have been held every four years since 1992, with the exception of 2004.

They have been hosted by Bonn, Bangkok, Hanover, Busan, Šiauliai and Jakarta.

In 2020, the TAFISA World Games will be held in Lisbon.

The main objective of the event is to preserve the traditional sports, promote new types of sport, and encourage cooperation and the exchange of experience between sports enthusiasts from different countries.

From the presentation made by Sengleev at the ceremony, it emerged that the Opening Ceremony is proposed to be held at the Nizhny Novgorod Stadium, where FIFA World Cup matches were played last year.

The streets, squares and embankments of Nizhny Novgorod, located in a picturesque area at the confluence of two large rivers – the Volga and the Oka, would become venues for the 2024 TAFISA World Games.

On the final day of the event, participants and guests would have the chance to become familiar with the sights of the region.

Furthermore, within the framework of the 2024 TAFISA World Games, an international conference is envisaged which will be dedicated to the development of mass sports and the role of the National Olympic Committees (NOCs) in that area.

Baumann stated the Russian bid has a high chance of success.

"There are several reasons why the TAFISA World Games should be held in your country," he said.

"First of all, Russia has been and remains the main driving force in the world of sports and I say this in the broadest sense of the concept.

"I mean not only in regard to high achievement sports, but also in terms of the number of people involved in regular physical activity, specifically for the benefit of health.

"After the tour of Nizhny Novgorod and interaction with many people, I have no doubt that this ancient and, at the same time, modern city will be an excellent platform for the World Games.

"Furthermore, I would like to make a compliment to the Russian Olympic Committee.

"There are not so many NOCs in the world that are engaged in the development of mass sports.

"In this regard, the Russian Olympic Committee has given a worthy example to follow."

Pozdnyakov said that during a recent conversation with IOC President Thomas Bach, he was assured that if the Russian application is successful, the IOC would complement the concept of the 2024 TAFISA World Games in Nizhny Novgorod with its own events.

"This demonstrates the unity of the international sports community in the face of modern challenges," he added.