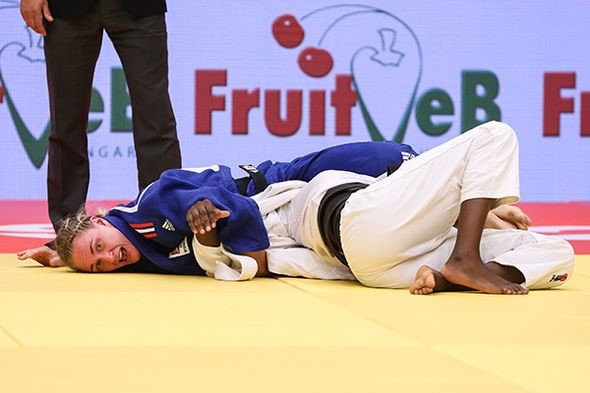 Howell threw her powerful opponent for a waza-ari and then pinned her with a sankaku-gatame to clinch the women’s under-70 kilograms gold medal at László Papp Budapest Sports Arena.

She has now put pressure on her under-70kg team-mate and Olympic bronze medallist Sally Conway in the race for the one place for Tokyo 2020.

In the women's under-63kg final, Japan's Masako Doi defeated Beijing 2008 Olympic bronze medallist Ketleyn Quadros of Brazil in golden score after a tense battle which failed to produce a score.

Quadros slipped off the pace in added time and was reprimanded, for the third time, for being passive to hand Doi her first IJF Grand Prix gold medal.

Over on the men's side of competition, Akil Gjakova captured Kosovo’s third medal in Budapest but the first of the golden variety after a faultless display in the under-73kg category.

Gjakova threw Russia's Georgii Elbakiev with a sumptuous sasae-tsurikomi-ashi for his second score to seal victory.

Uzbekistan's Khikmatillokh Turaev overcame compatriot Giyosjon Boboev in the first bronze medal match and was joined on the third step of the podium by Azerbaijan's Telman Valiyev, who ended a miserable day for three-time world champion and double Olympic bronze medallist Masashi Ebinuma of Japan.

There was also success today for Georgia's Tato Grigalashvili as he swept aside Brazil's Joao Macedo in the men's under-81kg final.

Macedo, the older brother of Rafael Macedo, world number 15 in the weight category above, was overwhelmed by the 19-year-old Grigalashvili who opened the scoring with an o-uchi-gari for a waza-ari and added a second from a trademark hip throw.

Hungary's Attila Ungvári was one of the two bronze medallists along with Bulgaria's Ivaylo Ivanov.

Action in Budapest is due to conclude tomorrow.