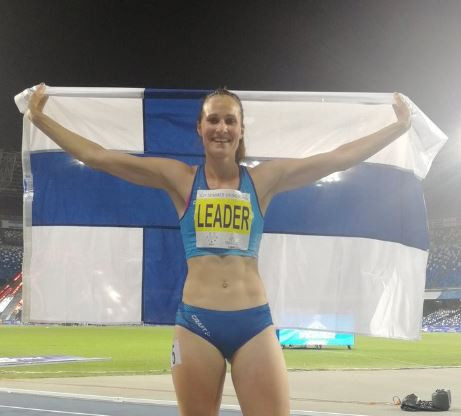 The Finnish star had seen a 212-point lead cut to just 17 at the end of the competition’s first day before Burkina Faso’s Marthe Koala leapt into the lead with a 6.40 metres long jump.

A topsy-turvy event had yet more twists as Sillman launched the javelin to 50.07m and a lead of 84 points after six of seven disciplines.

That gave her a seven-second lead going into the 800m and she stuck to Koala’s heel to secure victory in a personal best 6,209, with the west African athlete taking silver on 6,121 points.

Switzerland's Caroline Agnou stormed around the 800m to claim bronze on 5,844 points.

"The race was quite difficult, this weather was quite warm,” said Sillman.

“In Finland we don’t have this kind of heat so it’s a bit warmer here.

“The competition was awesome and everything was generally okay.

“We had problems with the buses and it was a bit much because we couldn’t trust the schedule but once we knew about it we were prepared for it.”

Sillman said Finland’s first gold of the Universiade, won earlier in the day in sailing, had given her encouragement in her own battle for gold.

“We knew about the team gold and we are happy for the team.

“It definitely helps to push you on.

"The limit to qualify for Doha [World Athletics Championships] is 100 points higher but the Universiade title was my goal for the season.

“I made my personal best and I am happy.

“I don’t have any negatives from here.”

Japan secured a clean sweep of medals in the men’s 20 kilometres race walk.

Around 250 athletes competed on the 1km course, which started and ended at Largo Sermoneta.

Japan took gold in the team event ahead of China and South Korea.

Katie Hayward led an Australian one-two in the women’s event with Jemima Montag in second.

In the team event, Australia won gold as Ukraine claimed silver and China completed the rostrum.

Ukraine celebrated two golds in half an hour as they won the women’s hammer throw and triple jump crowns.

Iryna Klymets exceeded 70m to see off Polish duo Malwina Kopron and Katarzyna Furmanek with a throw of 71.25m.

Universiade record holder Kopron recorded a throw of 70.89m to claim silver as Furmanek set a personal best of 69.98m for bronze.

Olha Korsun was tearful after her effort of 13.90m as she earned the triple jump title.