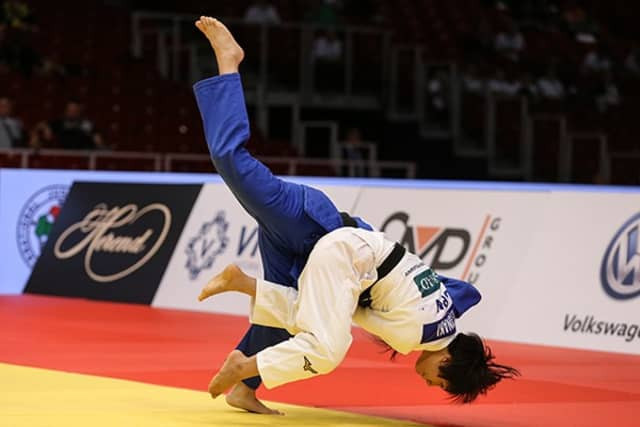 Asian nations dominated the opening day of the International Judo Federation (IJF) Grand Prix in Hungary's capital Budapest with four of the five gold medals on offer going to athletes from the continent.

Among the winners at László Papp Budapest Sports Arena was Japan’s former world champion Funa Tonaki, who was pushed all the way by Kosovo’s Distria Krasniqi in a thrilling women’s under-48 kilograms final.

Tonaki opened the scoring with a waza-ari before being caught with a uchi-mata for a waza-ari score on the edge of the area.

In golden score, Tonaki had the edge as she pinned down her opponent for 10 seconds.

The first bronze medal contest was won by Spain’s Julia Figueroa at the expense of compatriot Laura Martinez Abelenda.

There was also success for Japan in the women’s under-52kg category after Chishima Maeda beat Switzerland’s Fabienne Kocher by a waza-ari score to capture her first gold medal on the IJF World Tour.

World number 64 Kocher, who was appearing in her first IJF final, was resolute and went the distance with the impressive Maeda, who was the silver medallist at the 2017 Junior World Championships.

Joining her on the third step of the podium was Spain’s Ana Perez Box following a stunning win over Kosovo's reigning Olympic champion Majlinda Kelmendi, who suffered her first loss of this year in the semi-finals against Maeda.

Smetov offered more with a higher work rate and pressed Ganbat, who was second best throughout the final.

The match was settled when Smetov threw with a seoi-nage in the closing seconds for ippon.

Chinese Taipei’s Yung Wei Yang and the Netherlands’ Tornike Tsjakadoea were the bronze medallists with Uzbekistan’s Sharafuddin Lutfillaev and Spain’s Francisco Garrigos just missing out on a podium place.

Today's one other Asian triumph came courtesy of Mongolia’s Kherlen Ganbold, who recorded his second IJF World Tour win in as many weeks as he responded to being left out of his country's team for the upcoming World Championships in Tokyo in the best possible way.

Ganbold, victorious at the IJF Grand Prix in Montreal last Friday (July 5), trailed Kazakhstan’s Yeldos Zhumakanov by a waza-ari score but fought his way back into the men's under-66kg final and subdued his rival by ippon.

The only non-Asian gold medallist today was Olympic champion Rafaela Silva of Brazil as she earned her sixth IJF Grand Prix title with a resounding win over Kosovo’s Nora Gjakova in the women’s under-57kg final.

Silva took her opportunity with 53 seconds left as she countered a weak uchi-mata on the edge of the contest area by rolling over her opponent for ippon.