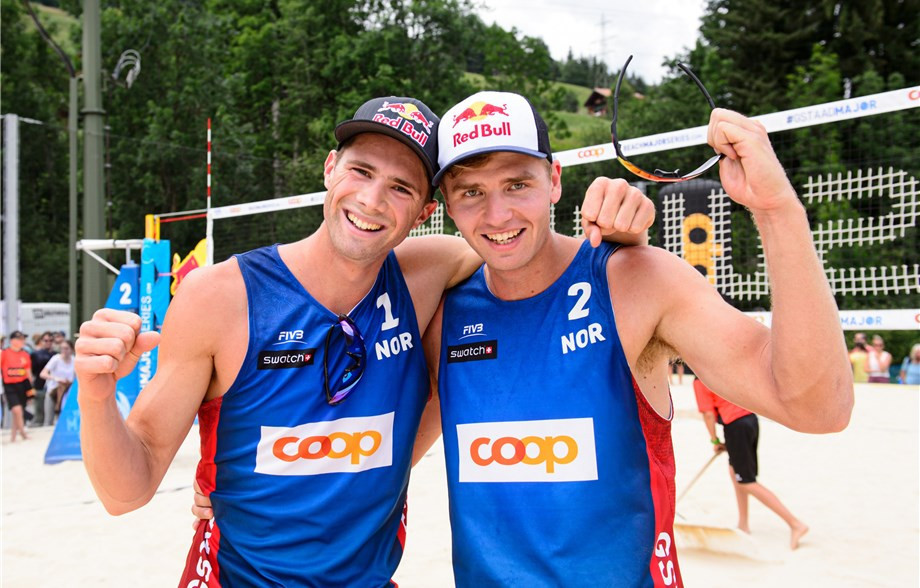 Defending champions Anders Mol and Christian Sørum won both their matches today to progress to the men’s semi-finals at the International Volleyball Federation (FIVB) Beach World Tour event in Gstaad in Switzerland.

Next up for Norwegian duo Mol and Sørum are Brazil’s Evandro Gonçalves Oliveira Júnior and Bruno Oscar Schmidt, who overcame Russia’s Nikita Liamin and Taras Myskiv 21-12, 21-12 before claiming a 20-22, 23-21, 15-10 win over Qatar’s Cherif Younousse and Ahmed Tijan.

"We love playing here," said Mol, who celebrated his 22nd birthday last week at the FIVB Beach World Championships in German city Hamburg, where he and Sørum placed third.

"We won our first World Tour gold medals in Gstaad, so this place is very special for us.

"I am looking forward to Saturday."

Lupo and Nicolai lost to Bruno and Alison Cerutti in the Rio 2016 final after Brouwer and Meeuwsen secured the bronze medal.

Lupo and Nicolai have already beaten Brouwer and Meeuwsen at this event, winning their Pool E match on Wednesday (July 10) in straight sets.

They had earlier defeated Germany’s Sandra Ittlinger and Chantal Laboureur 21-19, 21-16.

Dubovcova and Strbova will face top-seeded Swiss pairing Nina Betschart and Tanja Hüberli, who overcame Brazil’s Barbara Seixas De Freitas and Fernanda Alves 21-15, 13-21, 17-15 in the round of 16.

The other last-eight tie in their half of the draw is an all-American clash between third-seeded Alexandra Klineman and April Ross and seventh-seeded Brooke Sweat and Kerri Walsh Jennings.

The Brazilian duos of fifth-seeded Ana Patricia Silva Ramos and Rebecca Cavalcanti Barbosa Silva and 15th-seeded qualifiers Maria Antonelli and Carolina Solberg Salgado are positioned in the opposite half of the draw.

Silva Ramos and Silva meet second seeds and defending champions Melissa Humana-Paredes and Sarah Pavan of Canada, while Antonelli and Solberg Salgado go up against ninth seeds and reigning European champions Sanne Keizer and Madelein Meppelink of the Netherlands.