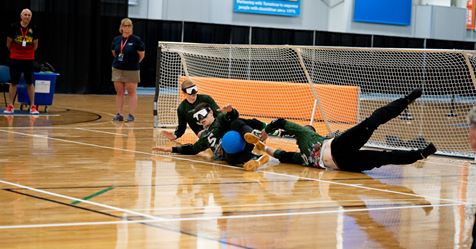 Reigning Paralympic champions Lithuania proved too strong for Turkey in their final as they powered to a 7-3 win at the Turnstone Center.

The Americans can take comfort, however, as all four finalists had already booked their places at Tokyo 2020 by reaching the gold medal games.

Mantas Panovas scored five times for Lithuania in a match which featured nine penalties across the two halves.

Their victory means the Rio 2016 gold medallists have bounced back from a disappointing fourth-place finish at last year's World Championships in Malmö.

"All the time the win is the best emotion and I am very happy," Lithuania's Marius Ziibolis said.

"Now we will relax a little bit and then we start to prepare for the European Championships because last time we were first and we need to keep it that way."

The women's final was a low-scoring affair which pitted Rio 2016 silver medallists China against the US who won bronze in the Brazilian city.

"We followed our game plan defensively and we accomplished one of our main goals, and that was to qualify for Tokyo next year.

"We're really proud of our performance and so grateful for all the support we received from Turnstone and the community of Fort Wayne who have just made the environment so positive and the energy in the room was just awesome."