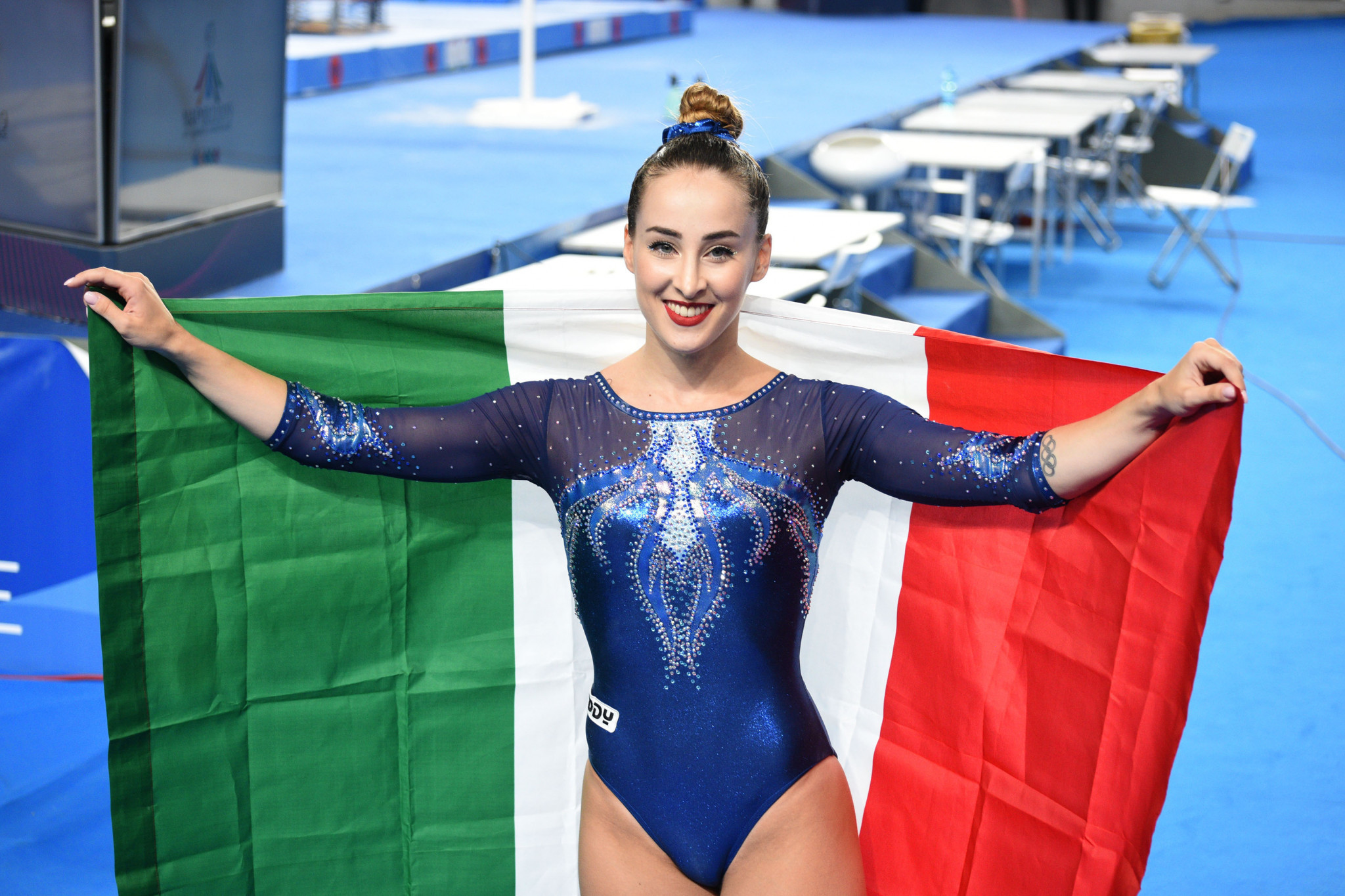 Italy's controversial gymnast Carlotta Ferlito was the darling of PalaVesuvius Hall after claiming gold in the women's floor exercise final.

The 24-year-old, who was one of the Torchbearers for the Summer Universiade's Opening Ceremony on Wednesday, put together a superbly-executed routine to top the podium on 13.200 points.

Ferlito, infamously accused of making a racist comment towards American gymnast Simone Biles during competition, was lauded by a vociferous home crowd.

Japanese athletes had taken all four gymnastics gold medals prior to today's apparatus finals but Aiko Sugihara had to settle for silver on 13.000.

Russia's Uliana Perebinosova won bronze on 12.700 – her third medal in 24 hours after taking all-around silver and bronze on beam.

Japan's domination in the gymnastics continued, though, with Hitomi Hatakeda grabbing another gold on beam and Kakeru Tanigawa and Kazuma Kaya also triumphing.

Initially scored at 14.550, an inquiry by the Japanese saw his mark altered to 14.850 and he overhauled Russian rival Ivan Stretovich for gold.

There were 32 gold medals up for grabs today but 33 golds were presented after Justin Ress and Zane Waddell swam a dead heat in the men's 50m backstroke final.

South Africa's Waddell bagged the Universiade record yesterday when qualifying in 24.46 but he had to share gold tonight after clocking the same time as American Ress, 24.48.

Russia's Grigory Tarasevich took bronze in 24.94, with no silver medal being awarded.

The United States enjoyed further medal success when Katharine Berkoff broke her own Universiade record to win the 100m backstroke ahead of compatriot Elisa Haan.

Britain won a first Summer Universiade gold since 2015 when Alicia Wilson surged to the top of the podium in the 200m individual medley.

At Mostra d'Oltremare, China's domination came to an end as Mexico won both golds on offer on the penultimate day of diving.

Alejandra Estrella had been the only athlete to prevent China topping the diving podiums this week and she bagged a second gold alongside Jose Balleza Isaias in the platform mixed synchro with a score of 311.13.

Earlier, Dolores Hernández and Carolina Mendoza scored 67.50 with their final dive to overhaul Chinese duo Minghong Leng and Yi Shen at the top of the rankings.

As taekwondo began on day five, gold medals were awarded in the men's and women's poomsae contests.

South Korea's Kang Wan-jin won gold in the men's final with a score of 111.2, as American Edward Jeong, scoring 104.9, and Koorosh Bakhtiyar of Iran, on 101.5, took silver and bronze, respectively.

The women's final was won by the United States' Adalin Munoz, who impressed the judges to score 98.6.

Chinese Taipei's Su Chia-en won silver on 96.9 and the bronze was awarded to Yen Ji-hye of South Korea with 96.6.