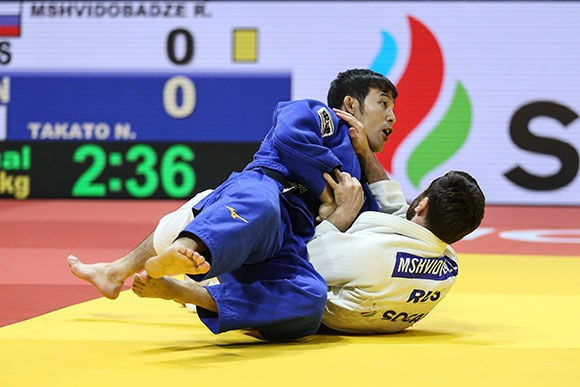 Naohisa Takato of Japan overcame Georgia's Robert Mshvidobadze in a repeat of the World Championships final to secure the under-60 kilograms gold medal at the International Judo Federation Grand Prix in Montreal.

Takato again got the better of his arch-rival as the world champion claimed victory by ippon in the bout for gold at Maurice Richard Arena.

Adonis Diaz of the United States and South Korea's Lee Ha-rim were the recipients of the bronze medals in the division.

Takato was one of two Japanese gold medallists on the opening day as 18-year-old Wakana Koga topped the podium in the women's under-48kg category.

Pareto recovered from her semi-final exit to seal bronze alongside Shira Rishony of Israel, who sealed her ninth Grand Prix medal by finishing joint third.

Israel had a gold medal to celebrate later in the day when Gefen Primo defeated American Angelica Delgado to clinch the women's under-52kg crown.

Primo was joined on the podium by bronze medallists Sarah Menezes of Brazil, the London 2012 Olympic champion, and Rio 2016 silver medallist Jeong Bok-yeong.

Christa Deguchi triumphed in an all-Canadian under-57kg women's final as she was too strong for compatriot and Osaka Grand Slam winner Jessica Klimkait.

Deguchi emerged victorious from a thrilling contest as she got Klimkait in an inescapable shime-waza.