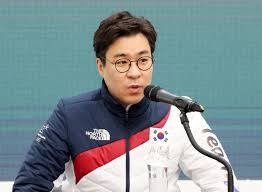 "Mr. Kim has been appointed as the head coach of the short track team."

He will add expertise to a team already expected to be among China's best hopes for medals at Beijing 2022.

Short track speed skaters have won 33 of the 62 medals that China have won at the Winter Olympics since its debut at Lake Placid in 1980.

This includes 10 of the 13 gold medals China have won.

At Pyeongchang 2018, short track speed skaters won three medals, including China's only gold of those Olympic Games - Wu Dajing in the men's 500 metres.

But at this year's World Short Track Speed Skating Championships in Sofia, China failed to win a gold medal.

They finished third overall on the medals table with three silver and a bronze behind the all-powerful South Korean team.

They won eight gold, five silver and two bronze - more than the next three countries combined.

"The Beijing Olympic Games are still three years away, it's hard to predict the results now," Wang said.

Kim refused to predict similar success for China at Beijing 2022 as South Korea at Pyeongchang 2018.

"I would like to take one step at a time and focus on our training," said Kim.

"Miss Wang and I are good friends, so I am very happy to come here to help more Chinese skaters get better.

"Everything is very good, all we need to do is trying our best in the training."

Kim is one of more than a dozen foreign coaches and technical staff to have China's national speed skating programme.

They include Canada's Derrick Campbell, the Olympic gold medallist in the short track 5,000m at Nagano 1998.

Rutger Tijssen of the Netherlands has been appointed as the head coach of the Chinese speed skating team.