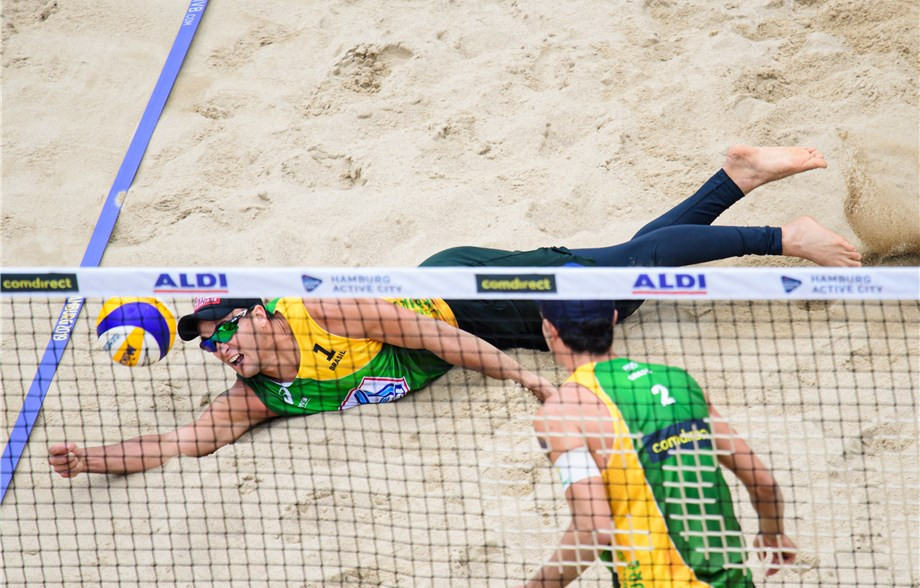 Highly-regarded pairs from Poland and Russia were eliminated by teams from Brazil and the United States, respectively, in the men’s round of 16 ahead of tomorrow’s Beach Volleyball World Championships quarter-finals.

In the next match on the side court, fifth-seeded Ilya Leshukov and Konstantin Semenov of Russia lost 21-18, 21-18 to 13th-ranked Tri Bourne and Trevor Crabb of the United States, who will now meet the Brazilians as this International Volleyball Federation (FIVB) flagship event nears Sunday’s finals.

"We lost to the Brazilians in a bronze medal match in China seven weeks ago," Crabb told FIVB.

"We can get some redemption here, so, hopefully, that helps us bringing that extra fire again."

Also earning an upset today were Adrian Carambula and Enrico Rossi of Italy.

As the last entry into the men’s event after a late withdrawal by a team from Sierra Leone, the 45th-seeded Italians eliminated 32nd-seeded Robin Seidl and Philipp Waller of Austria 21-18, 21-15.

Top-seeded Anders Mol and Christian Sorum of Norway advanced at the expense of 23rd-seeded Martins Plavins and Edgars Tocs of Latvia.

Canada’s ninth-seeded Melissa Humana-Paredes and Sarah Pavan earned a place in tomorrow’s women’s final with a 23-21, 17-21, 19-17 win over 17th-seeded Nina Betschart and Tanja Huberli of Switzerland.

Their opponents will be the United States pairing of Alix Klineman and April Ross, who bagged a 21-15, 21-18 victory over Mariafe Artacho and Taliqua Clancy of Australia.