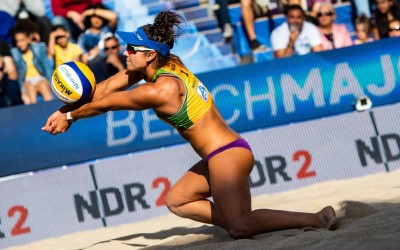 Artacho del Solar and Clancy, who are fourth in the world rankings, produced a dominant performance to triumph 21-15, 21-19 at the German city’s Am Rothenbaum Stadium.

"We stuck together really strong and were really patient," Artacho del Solar said.

"They are a great pair and it wasn’t going to be an easy game, and they weren’t just going to give it to us.

"So we really had to earn it and I’m really proud of what we did."

The Aussies will next meet Switzerland’s Joana Heidrich and Anouk Vergé-Dépré for a place in the quarter-finals after they beat home duo Leonie Körtzinger and Sarah Schneider 24-22, 19-21, 16-14.

Among the other last-16 match-ups will be between Canada's Sarah Pavan and Melissa Humana-Paredes against the Netherlands' Sanne Keizer and Madelein Meppelink.

Another Brazilian team to advance is Bárbara Seixas de Freitas, the 2015 world champion, and Fernanda Alves.

When the bigger guy does the biggest dig of the game… 😂 Nicolai/Lupo 🇮🇹 and Andre/George 🇧🇷 compete to top Pool H!

They downed Austria's Katharina Schützenhöfer and Lena Plesiutschnig 21-16, 21-16 and will now face Germany's Karla Borger and Julia Sude, who ousted compatriots Kim Behrens and Cinja Tillmann with a 19-21, 21-17, 15-13 win.

The draw was made today following the conclusion of pool play.

Thole and Wickler were confirmed as the Pool L winners yesterday, while Brouwer and Meeuwsen were second in Pool F.

Among the other big games to look out for is that between the US's Taylor Crabb and Jacob Gibb, the Pool G runners-up, and Spain's Pablo Herrera Allepuz and Adrián Gavira Collado, the Pool I runners-up after an 11-21, 16-21 loss against Brazil's Evandro Gonçalves and Bruno Oscar Schmidt today.

Defending world champion Gonçalves and reigning Olympic champion Schmidt topped Pool I and will next go up against US's William Allen and Stafford Slick, the second-place finishers in Pool E.

Brazil's Andre Loyola Stein and George Wanderley, meanwhile, will need to get past Latvia's Aleksandrs Samoilovs and Janis Smedins.

Loyola Stein and Wanderley had to settle for second place in Pool H after losing 23-25, 21-16, 12-15 to Italy's Paolo Nicolai and Daniele Lupo, who clinched top spot.

Samoilovs and Smedins ended up second in Pool K after losing 19-21, 22-24 against Canada's Sam Pedlow and Sam Schachter today.

The top four seeds teams still in the competition, including world number ones Anders Mol and Christian Sørum of Norway, will do battle with one of the winners from the lucky loser playoffs.

Action is due to run through to Sunday (July 7).