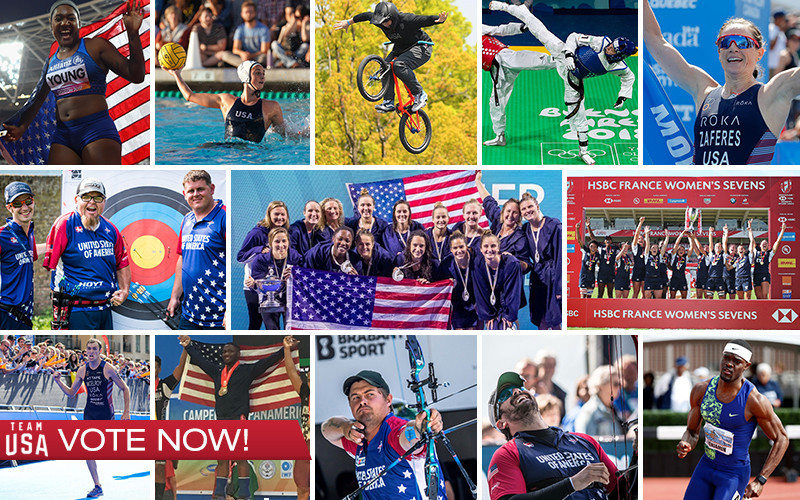 The United States Olympic and Paralympic Committee has announced the finalists for the Team USA Awards Best of June, recognising the outstanding achievements of the country’s athletes.

A total of 10 sports – including archery, BMX, Para archery, Para athletics, rugby sevens, taekwondo, track and field, triathlon, water polo and weightlifting – are represented among the 13 finalists across men’s, women’s and team categories.

Among the male athlete of the month nominees is Rai Benjamin, who claimed victory in the men's 400 metres hurdles at the Prefontaine Classic in Stanford, California, securing the eighth-fastest time in history, 47.16sec, to win by almost two seconds.

Joining Benjamin on the list is CJ Cummings after he became the first weightlifter in history to claim four consecutive Junior World Championship titles with his victory in Fiji’s capital Suva, and triumphed at the Junior Pan American Championships in Havana in Cuba.

Ellison captured his first World Archery Championships title in men’s recurve and his country’s first since 1985, while McElroy claimed the silver medal at the World Triathlon Series (WTS) stop in English city Leeds, marking only the second WTS medal in history for an American man.

Thompson, meanwhile, earned the number one world ranking after winning the men's compound title at the World Para Archery Championship in 's-Hertogenbosch in the Netherlands.

There are also five contenders for female athlete of the month, including water polo player Maddie Musselman, who led the US with 14 goals en route to the gold medal at the International Swimming Federation (FINA) World League Super Final in Hungary's capital Budapest, earning the tournament's Most Valuable Player honour.

One of her four challengers is BMX cyclist Hannah Roberts, who captured the women's gold medal at the International Cycling Union BMX Freestyle World Cup stop in Montpellier in France, marking her second straight win on the circuit.

Zaferes won the gold medal at the WTS event in Montreal as well as a silver medal at the stop in Leeds, maintaining her number one position in the world rankings.

Zolotic, meanwhile, secured the bronze medal in the women's 57 kilograms division at the World Taekwondo Grand Prix in Rome, becoming the youngest American taekwondo athlete in history to medal at such an event at 16 years old.

The men’s World Para Archery Championship recurve open side is one of three team of the month nominees.

The women's national rugby sevens team is also in the running after it won its first World Rugby Sevens Series gold medal at the event in Biarritz in France, qualifying for the Tokyo 2020 Olympic Games and finishing the season with a programme-high number two world ranking in the process.

Completing the trio of nominees is the women's senior national water polo team that went undefeated and claimed the gold medal at the FINA World League Super Final to qualify for Tokyo 2020.

Fans are invited to vote for their favourite athletes and teams, through to midnight on July 8, by clicking here.