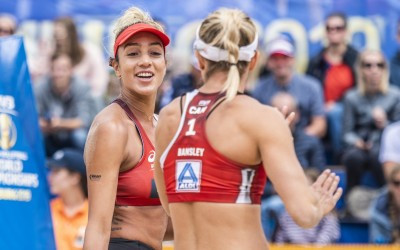 Wilkerson and Bansley, ranked fourth in the world, secured the runners-up spot in Pool C today with a 14-21, 21-19, 15-13 win over Germany’s Kim Behrens and Cinja Tillmann at the German city's Am Rothenbaum Stadium.

Another mouthwatering match will be Brazil's Agatha Bednarczuk and Eduarda Santos Lisboa against three-time champion Kerri Walsh Jennings and team-mate Brooke Sweat of the United States.

Bednarczuk and Lisboa were confirmed as Pool F winners yesterday, while Walsh Jennings and Sweat had to settle for third place in Pool G behind Artacho del Solar and Clancy.

Reigning champion, Laura Ludwig, and team-mate Margareta Kozuch’s reward for topping Pool J is a game against the American pair of Summer Ross and Sara Hughes.

Ludwig and Kozuch beat Nigeria’s Tochukwu Nnoruga and Francisca Ikhiede 21-10, 21-9 today, while Ross and Hughes fell to a 16-21, 18-21 defeat at the hands of Russia’s Nadezda Makroguzova and Svetlana Kholomina to finish second in Pool K behind their opponents.

There is one all-German tie in the last-32 that will guarantee a home team in the last-16, with Pool E winners Karla Borger and Julia Sude taking on Pool C’s third-place finishers Behrens and Tillmann.

In the men's event, Pool F went down to the wire on a dramatic afternoon.

Dubbed the "Group of Death", all four teams went into today needing a win to keep their hopes of reaching the elimination stage alive.

In the end, it was Canada's Ben Saxton and Grant O’Gorman and 2013 world champions Alexander Brouwer and Robert Meeuwsen of The Netherlands who both squeezed directly through to the last-32 with straight-set victories.

It was tough on Azaad and Capogrosso, eliminated by 20 points after achieving what they believed to be their best-ever result on Sunday (June 30) when they beat Brouwer and Meeuwsen.

The match between Brouwer and Meeuwsen and Americans Philip Dalhausser and Nicholas Lucena concluded with a 21-19, 21-15 victory for the Dutchmen.

It ensured they joined Saxton and O’Gorman in the draw for the round of 32 and consigned Dalhausser and Lucena to a lucky loser play-off for the first time in their World Championship careers.

The draw for the men's elimination stage is due to take place tomorrow.