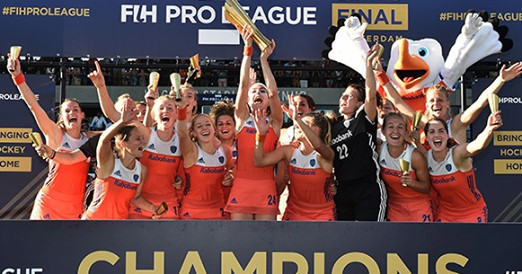 The Netherlands were crowned winners of the inaugural women's International Hockey Federation (FIH) Pro League thanks to a shootout victory over Australia, triumphing in a thrilling final played in glorious sunshine at the Wagener Stadium in Amsterdam.

The match had ended 2-2 before the hosts won the one-on-ones 4-3 in front of a sell-out crowd.

Mariah Williams had put Australia ahead in the 19th minute when she scored from a penalty corner before Marijn Veen pulled the Dutch level four minutes later.

Kelly Jonker’s fourth quarter strike put the hosts ahead in the fourth quarter, but a late penalty stroke was clinically dispatched by Kaitlin Nobbs to send the match into the shootout.

With the score locked at 3-3 after four attempts each, a disallowed goal from Australia’s Brooke Peris allowed Lauren Stam to wrap up the victory as the Oranje added the FIH Pro League to their world and European titles.

"It was amazing, it was a tough match with the shoot-outs but I’m so proud we got the win," Dutch player Xan de Waard said.

"It’s the first FIH Pro League ever, so I think that is amazing.

"We’ve had so much fun, so to end it like this is amazing."

Earlier in the day, Germany claimed third-place with a 4-3 shootout victory against Argentina after the match had finished 1-1.

Micaela Retegui had put Argentina ahead with a sensational goal in the first quarter before Germany equalised through Anne Schröder in the third period.

The opening four efforts in the one-on-ones were missed before Germany took control, with Janne Müller-Wieland, Pia Maertens and Viktoria Huse all on target as Die Danas triumphed in 3-1 in the shoot-out.

As well as the lifting the trophy, the Netherlands also saw one of their players collect an individual award, with Frederique Matla named as the best player of the FIH Pro League.

Australia’s Rachael Lynch was named goalkeeper of the Grand Final, while Retegui took the best goal of the FIH Pro League Grand Final thanks to her brilliant strike against Germany in the playoff match.

New Zealand’s Olivia Merry was also confirmed as the overall top scorer in the FIH Pro League, with her total of 15 goals.

Tomorrow, the winner of the inaugural men’s FIH Pro League competition is set to be decided when the two highest-ranked men’s teams will contest the title match with world champions Belgium due to take on in-form Australia.

The match will be proceeded by the third-place playoff between The Netherlands and Britain.