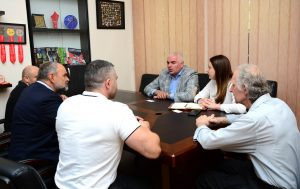 Tbilisi has hosted an International Fitness and Bodybuilding Federation (IFBB) technical seminar which placed a focus on judging.

The seminar was led by IFBB vice-president and judging committee chair Pawel Filleborn.

He provided key information to athletes, coaches and judges at the meeting, the governing body said.

Following the conclusion of the seminar, Filleborn held a separate meeting with Shalva Gogoladze, Georgia’s Deputy Minister of Education, Science, Culture and Sport.

The officials discussed the growth of IFBB competition in the region.

A focus was also placed on next month’s IFBB Georgia Grand Prix competition in Tbilisi, the country's capital.

The event is expected to attract competitors from both Asia and Europe.

The Georgia Grand Prix will take place from July 5 to 7.

Filleborn had been joined at the meeting by Konstantin Matsaberidze, President of the Bodybuilding and Fitness Federation of Georgia.