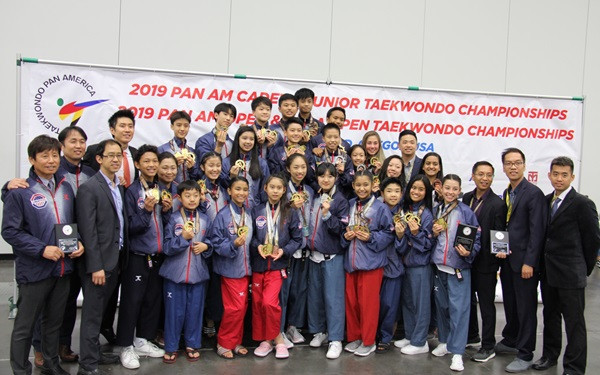 USA Taekwondo has congratulated its athletes and coaches after the country topped the medal table at the Pan American Cadet and Junior Poomsae Championships in Portland.

The host nation amassed 12 golds, four silvers and three bronzes during the three-day event held at the Oregon Convention Center, which concluded yesterday.

Among the winners at cadet level were Sunghyun Eric Gun and wild card Belina Jeon, winners of the the men’s and women’s individual titles respectively.

Gun was also part of the gold medal-winning men’s team along with Elliot Kim and Shawn Seo, while the trio of Chiara Francesca Flotildes, Yuri Paige Kim and Lana Moraleda combined to clinch the women’s team crown.

Ryan Real and Megan Lee were both junior individual and team victors.

Real’s team-mates on the men’s side were Brandon Cho and Ethan Sen, while Lee competed alongside Elaine Hsu and Erica Seo in the women’s team.

There was also a junior mixed pairs triumph for Yewon Jeong  and David Lee.

Completing the United States' list of gold medallists were Hannah Noble in the women’s individual freestyle, Sharlene Duong and Jacob Gonzaga in the mixed pair freestyle, and the six-strong mixed team freestyle outfit.

A number of USA Taekwondo awards were also handed out at the event.

Gun and Jeon were named the male and female cadet poomsae athletes of the year respectively, while Real and Lee came away with the equivalent junior prizes.