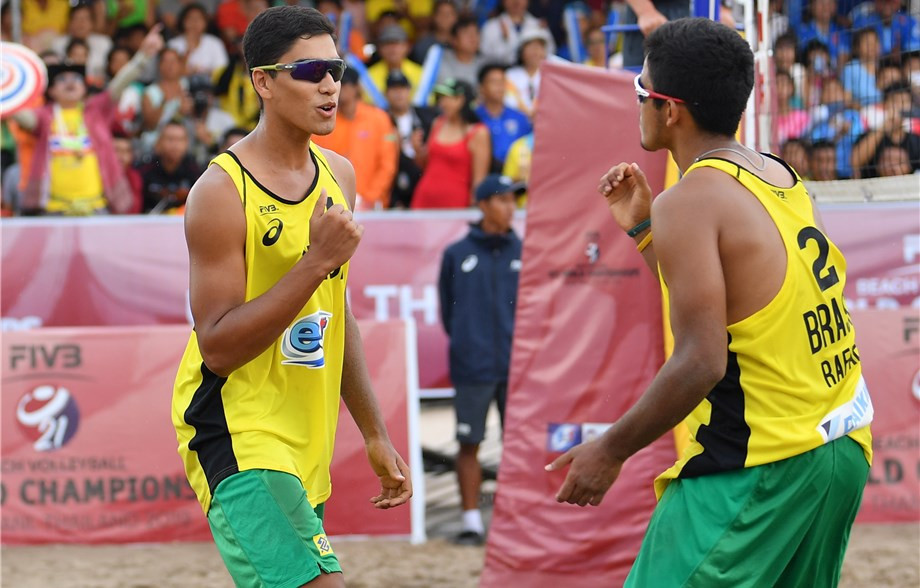 Brazilian pairs reigned supreme by winning both the men's and women's titles on the final day of the Beach Volleyball Under-21 World Championships in Udon Thani.

In the women's final Victoria Lopez Pereira and Vitoria de Souza came from behind to defeat Russia's Mariia Bocharova and Maria Voronina 17-21, 21-15, 15-13.

For Renato the victory in Thailand meant he defended the under-21 world title he won at the last edition in 2017 alongside Adrielson Silva.

The siblings were superb in both defence and attack as the Italians were unable to get close.

"We did everything well on the court.

"He [Rafael] played great defence and helped me so much."

Mexicans Miguel Sarabia and Raymond Gerald Stephens recovered from their defeat to the brothers in yesterday's semi-finals by beating Russia's Vasilii Ivanov and Sergey Gorbenko 21-16, 21-15 for bronze.

Brazil have also won the last three women's finals thanks to Pereira and De Souza's win, with all three of those successes coming against Russian pairs.

It is the fifth time the South American country has won both titles at the same Championships.

The final set was locked at 13-13 before Pereira and De Souza held their nerve to claim the crucial next two points.

"It was a very difficult game, but we got our acts together towards the end," Victoria said.

"We didn't do well on our serve in the first set, but we were able to play better in the next two sets."

It was a busy day for the women who also had to negotiate their semi-finals before the final.

Pereira and De Souza saw off Spain's Maria Belen Carro and Daniela Alvarez 21-16, 21-12 in their last four clash as Bocharova and Voronina knocked out Germany's Svenja Muller and Sarah Schulz 21-17, 21-18.