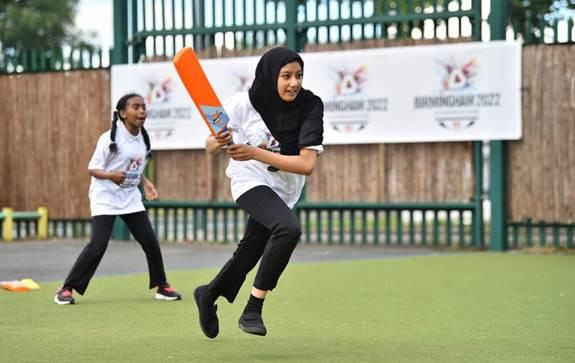 Shooting has been left off the programme for the 2022 Commonwealth Games in Birmingham, it was officially confirmed here today.

As exclusively reported by insidethegames yesterday, women's cricket, beach volleyball and Para table tennis have been added with bids from shooting and archery failing.

The decision to include the three sports was ratified by the Commonwealth Games Federation (CGF) Executive Board at a meeting in the city this morning following a presentation from Birmingham 2022 officials.

It was announced at a local school where a cricket course for young girls was being held watched by CGF President Dame Louise Martin and Clare Connor, the former captain of England women's team and now the director of England Women's Cricket.

The inclusion of the sports must now be officially confirmed by 51 per cent of the CGF's 71 Member Associations.

An electronic vote is set to take place with a formal decision due within 28 days.

This is expected to be a formality - although there will be vocal opposition from several countries, expected to be led by India, to the decision not to include shooting.

The sport has featured at every Commonwealth Games since Kingston 1966, with the exception of Edinburgh 1970.

"Our recommendation of adding women's cricket, beach volleyball and Para table tennis is the result of a thorough review and we believe these sports would help us to enhance the existing programme and reach new audiences, while showcasing the sports to our local community, spectators and fans across the world watching on TV," Ian Reid, the Birmingham 2022 chief executive, said.

"It's also a selection that could help ensure that the 2022 Commonwealth Games will be the most inclusive in history, with a potential for the largest-ever Para-sports programme, and more female medallists than ever before, representing a great story not just for Birmingham 2022, but for women's sport in general."

The women's cricket event at Birmingham 2022 will be a Twenty20 tournament and it is proposed to hold all the matches at Edgbaston Stadium, the fourth largest venue for the sport in Britain with a capacity of 25,000.

The application for inclusion of women’s cricket for Birmingham 2022 is part of the global ambition for cricket to inspire and empower women and girls around the world and to drive greater levels of inclusivity and opportunity throughout the sport, the International Cricket Council (ICC) claimed.

"We are absolutely delighted that women’s cricket has been nominated for inclusion in Birmingham 2022," ICC chief executive Manu Sawhney said.

"I’d like to thank everyone at the CGF and Birmingham 2022 for the nomination and it would be a real honour to become part of the Commonwealth Games family.

"We are committed to accelerating the growth of the women’s game and breaking down barriers and gender stereotypes along the way.

"We share our ambition to deliver greater equality, fairness and opportunity in sport with the Commonwealth Games Federation.

"The platform of Birmingham 2022 will provide a springboard for women’s cricket and will inspire and engage young girls around the world to be part of this wonderful and inclusive sport."

The tournament is expected to be held over eight days.

A qualification process has yet to be established.

"The inclusion of women’s cricket in the Birmingham 2022 Commonwealth Games would be a landmark moment in the development of the sport," Tom Harrision, chief executive of the England and Wales Cricket Board, said.

"It would present us with a wonderful opportunity to capitalise on the global reach of these Games to showcase the very best of women’s cricket and in doing so inspire a new generation of women and girls from around the world to start playing the game."

Beach volleyball is expected to be played on a specially built court in the city centre.

The sport made its Commonwealth Games debut at Gold Coast 2018 when Australia's Christopher McHugh and Damien Schumann won the men's tournament and Canada's Melissa Humana-Paredes and Sarah Pavan the women's.

Para table tennis, meanwhile, is expected to be integrated into the existing table tennis programme due to take place at the National Exhibition Centre.

Its introduction will further the diversity of the programme by showcasing an unprecedented eighth Para-sport.