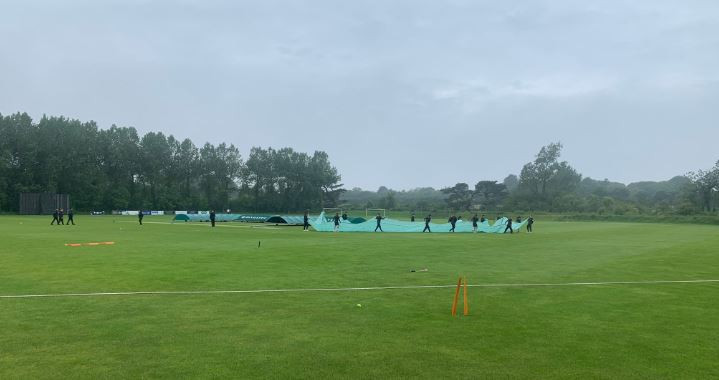 Jersey put themselves in the box seat to progress through the International Cricket Council T20 World Cup Europe Qualifier with a 73-run victory against Italy in Guernsey.

With rain forecast for a second successive day in Guernsey, there were doubts about whether spectators would see a ball bowled at the King George V Sports Ground in Castel.

Jersey made up for lost time after yesterday's scheduled was wiped out due to rain by claiming a fourth win from four matches to all but qualify for the ICC T20 World Cup qualifier in the United Arab Emirates in October.

Germany and Italy could still draw level on points with them but a clash against Germany tomorrow puts their destiny in their own hands.

Corey Bisson was out for a duck as Jersey fell to 2-1 but it was one-way traffic from there as Jonty Jenner knocked 71 to get the island nation back on track.

They closed the innings on 149-6 and set above dismantling the Italian challenge after the break.

Italy eased to 27-2 but from that point on the wickets gradually fell and their challenge was complete in a devastating bowling spell that saw seven wickets go for just 12 balls.

Germany ended Denmark's hopes of qualifying for the World Cup qualifier in the UAE with a thumping seven wicket victory in Castel.

The Germans won the toss and elected to field first.

Making quick inroads, they reduced their rivals to 7-2 before Anique Uddin put on 31 runs to start a Danish fightback before being run out.

Denmark closed their innings on 109-8.

Germany seized the initiative after the break as Craig Meschede, with 68 runs, and Amith Sarma, with 27, made a second wicket partnership of 95 to steer them to the edge of victory.

For the Germans to progress though they will need to win against both Norway and Jersey tomorrow.

Hosts Guernsey defeated Norway by four wickets to record their first victory of the week.

The covers came off at noon and Guernsey were in no mood to hang about, especially with a changeable forecast and grey skies looming large.

Winning the toss they put Norway in to bat as the match was reduced to 16 overs per side.

Walid Ghauri led the Norwegian resistance with 38 after the opening batsmen Raza Iqbal and Pratik Agnihotri walked for just five and six respectively.

But Norway collapsed to 95-6 as Jordan Martel claimed 3-15 from three overs with the ball.

In response, Guernsey made 28 before Ashley Wright and then Lucas Barker went in successive balls and at 28-2 the hosts were not as comfortable.

The ship was steadied, though, and with just one ball to spare, Guernsey reached their target at 96-6 to seal a first group win.